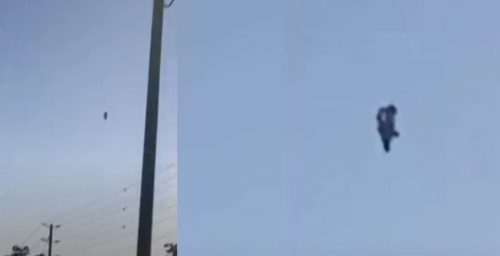 UFO Turns Out to Be… Mr. Peanut?

Was it an alien? An experimental government craft? No… it was a floating Mr. Peanut!  The initially unidentified object was filmed on August 21, 2021 hovering above the power lines over Mississauga. The footage then wound up on YouTube, where it was met with an untold number of possible explanations. One commenter suggested it was another “jet pack man.” Another said they had “seen lots of strange dark spirits” in the skies over Mississauga the last several years. Some believed the video was, in fact, a fake. However, a few locals were quick to chime in. This was no extraterrestrial machine, they said. No, this was a “dapper” Mr. Peanut balloon. Sometimes the explanation for a UFO is even more unusual than if it had been an actual UFO!    Check out the two videos below.  The first video is the original that caused all the commotion – the second is from a news report that shows you a much clearer picture of the “UFO” which is obviously a blowup balloon of Mr. Peanut!