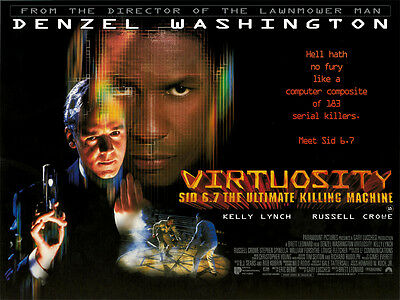 “When a virtual reality simulation created using the personalities of multiple serial killers manages to escape into the real world, an ex-cop is tasked with stopping its reign of terror.” — IMDb

If you combine The Terminator, Demolition Man, and The Joker, you come out with VIRTUOSITY… right down to the indestructible villain wearing purple while laughing maniacally, chased by a cop-felon released to chase the criminal down because he’s the only one who can.

Starring Denzel Washington and Russell Crowe’s butt cheeks, this 1995 film could easily have fit into the 80s with the neon lights, over-the-top villain with a non-stop grin, and science fiction technology and computer graphics that would be laughed at in “Programming 101” classes today.

But please don’t think I’m disappointed in the film. To be honest, everything I have just pointed out (except for Russell Crowe’s cleftal horizon) made this an immensely fun watch. This is one of those films where you chuck reality and believability to the side and just enjoy the ridiculous ride.

If you watch the trailer for this film you’ll see the only name promoted was Denzel. But make no mistake, this film belongs to Russell Crowe. He wasn’t yet a household name at the time, as it was still five years before his breakout role in Gladiator, but he steals every scene he is in, even those he shares with Washington.

Crowe’s Batman-villain-worthy routine gets tiring and you’re ready for it to end only shortly before it actually does end. I would almost say Crowe’s performance is too one-dimensional, but his character is actually a computer program, and any more range in emotion would’ve taken away from the coldness and viciousness of the character. In a way it’s a great example of Crowe’s acting ability even if it doesn’t show his phenomenal range as would be discovered years later.

Hardly a scene is wasted in this action-packed yet corny sci-fi extravaganza, which creates an exciting and entertaining 108 minutes.

4 out 5 screams for this one – worth it if only for the dance club and prison van scenes alone.