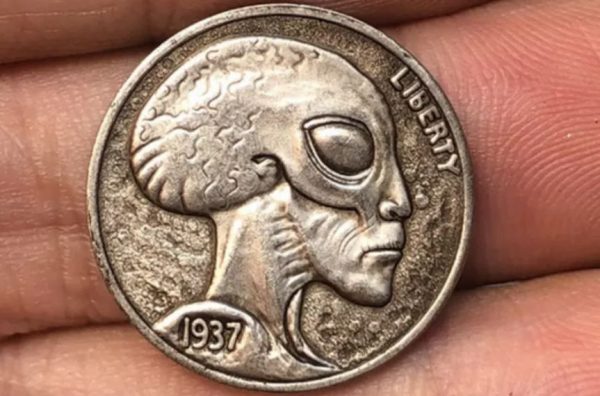 (From Anomalien.com) This week, a peculiar quarter that was discovered by a Michigan man (Reddit user albanesegummies327) has gained attention online.

Jordan published a photo of his find on Reddit’s r/coins forum, where it attracted attention due to what appears to be an extraterrestrial in its design.

In an interview with Newsweek, Jordan stated: “I was inspecting a large bag of quarter rolls, opening them one by one to look for older pieces with high silver content. In one of the rolls, I was immediately startled by an odd coin featuring the bust of an extraterrestrial. It stood out in stark contrast to the bust of Washington present on the other coins.”

Although it is not yet clear where the coin came from, many believe that it is “hobo coin”.

The hobo nickel (or hobo coin) is a sculptural art form involving the creative modification of small-denomination coins, essentially resulting in miniature bas reliefs. The US nickel coin was favored because of its size, thickness and relative softness. However, the term hobo nickel is generic, as carvings have been made from many different denominations.

Due to its low cost and portability, this medium was particularly popular among hobos, hence the name “hobo nickel.”

There were thought to be over 200,000 classic hobo coins produced between 1913 and 1980 – each with a unique piece of artwork created by the homeless.

However, the creator of this specific example’s identity is still unknown. And it is not even entirely clear whether this coin is really a “hobo coin”.