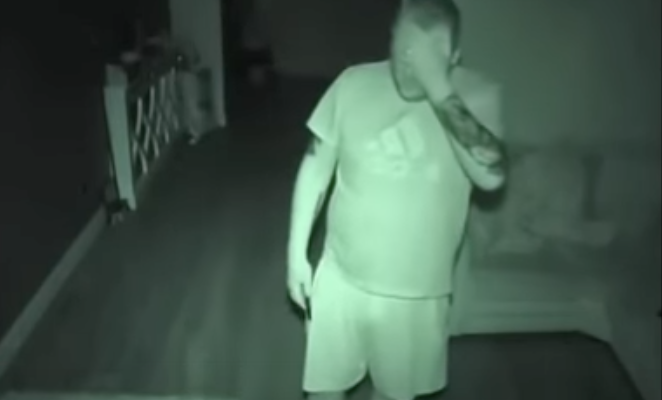 A creepy piece of footage circulating online purportedly shows a man having a rather eerie ‘conversation’ with his Alexa device and some suspect he is actually speaking with a ghost (see video below). Posted by a paranormal-themed TikTok account earlier this month, the date and location of the incident are unknown, though that hasn’t stopped the video from going viral due to the chilling nature of the scene that was seemingly captured by a home security system. In the footage, a man can be seen being roused from his sleep by some puzzling sounds coming from elsewhere in his house. As he goes to see what was causing the commotion, the situation takes an unnerving turn when his Alexa device starts speaking to him.

Specifically, the personal home assistant in his bedroom suddenly says “she was my wife,” which causes the man to walk back into the room and twice ask aloud “who was your wife?” In response, the device responds “you took her from me.” Appearing to be shaken up by the spooky answer, the bewildered witness pauses for a few seconds before replying “I didn’t take anyone.” No doubt confused by being plunged into this situation right out of his sleep, the man receives no answer from the Alexa and stammers “Who? Tell me who you want. You’ve got the wrong person.” As he waits to hear if the machine will say anything else, an odd dark mist can briefly be seen manifested and then disappearing behind the groggy homeowner.

The device finally ‘comes to life’ again and tells the man that “I found her here,” which leaves him all the more confused. The homeowner attempts to keep the ‘conversation’ going, but the device only responds with a robotic ‘laugh’ that is truly unsettling and causes the man to unplug his Alexa. As one might imagine, some viewers online have suggested that the man had been speaking with a ghost that was using his Alexa as a means of communication. More skeptical observers, however, contend that the scene is either a clever hoax or perhaps some kind of glitch in the Alexa software. With that in mind, what’s your take on the genuinely unnerving footage? Weigh in with your thoughts at the C2C Facebook page.