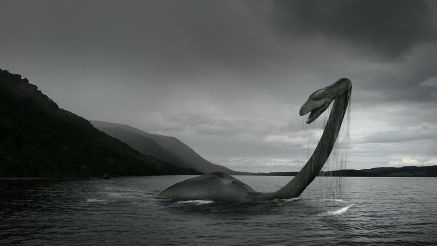 Turns Out The Loch Ness Monster Might Possibly Be Real

By Robyn White for Newsweek

The existence of the mythical Loch Ness Monster is plausible, scientists said after making a new discovery.

Researchers from the the University of Bath and University of Portsmouth in the U.K., and Université Hassan II in Morocco, have found fossils of small plesiosaurs—an extinct, long-necked reptile—in what used to be an ancient river system.

The fossils were discovered in what is now Morocco’s part of the Sahara Desert, however 100 million years ago it was a body of freshwater, according to the study published in Cretaceous Research.

The finding shows that the marine reptiles—once thought to be sea creatures—may have dwelled in freshwater habitats. The fossils found consist of bones and teeth from adult plesiosaurs measuring 9 feet long, and a bone from a baby, measuring 5 feet.

The Loch Ness Monster—often nicknamed Nessie—is a mythical creature from Scottish folklore. The creature is said to live in Loch Ness, in the Highlands. According to folklore, it’s a long-necked creature that still dwells in the loch’s depths.

Plesiosaur fossils were first discovered in 1823. Their appearance—four long flippers, long necks and small heads—are said to have inspired the tales of Nessie.

However, before now, it was suspected that they only dwelled in seawater.

While the tales are often dismissed, according to these findings it’s actually plausible that such a creature would have inhabited freshwater lochs such as Loch Ness.

Scientists can’t rule out the fact that these creatures may have been permanent freshwater residents. They suspect that these ancient creatures possibly lived in freshwater, having found the same “food-chipping their teeth on the armored fish that lived in the river.” This suggests they feasted on freshwater prey.

“It’s scrappy stuff, but isolated bones actually tell us a lot about ancient ecosystems and animals in them,” Dr. Nick Longrich, one of the authors of the paper, said in a press release. “They’re so much more common than skeletons, they give you more information to work with. The bones and teeth were found scattered and in different localities, not as a skeleton. So each bone and each tooth is a different animal.”

“We have over a dozen animals in this collection[…]We don’t really know why the plesiosaurs are in freshwater[….]It’s a bit controversial, but who’s to say that because we paleontologists have always called them ‘marine reptiles’, they had to live in the sea? Lots of marine lineages invaded freshwater.”

Other plesiosaur fossils have been found in England, various parts of Africa, and in Australia, North America and China.

While the findings suggest that the existence of the Loch Ness Monster is plausible, records also show that the beasts became extinct about 66 million years ago, at the same time as the dinosaurs.

Newsweek has contacted the University of Bath for a comment.