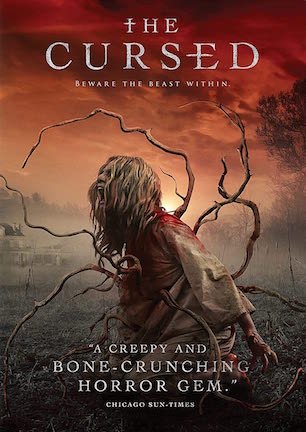 Before getting into my review, I want to give you a heads up that while I do not give any spoilers below, I also do not recommend watching the movie trailer, as it does give away spoilers.  Fortunately I was able to watch this film before seeing the trailers and I am so happy I did so!
Loosely (very loosely) inspired by the events of the Beast of Gévaudan, and acting as a story following those events, THE CURSED is beautifully done with a macabre feel throughout. While dark, the cinematography is still gorgeous – you’ll just want to be sure to watch this one with the lights out and curtains closed so you can soak it all in. Written and directed by Sean Ellis, the story is certainly unique, as is the monster, which looks incredible during the scenes that use practical effects. CGI is also used in many scenes, but not to the point of distraction – and takes place mostly in darker scenes where CGI works best.  The CGI creature in the daylight isn’t nearly as effective, but fortunately these scenes don’t linger long on the creature and jump into action quickly.  Upon reading the description of the film before viewing, I expected this to be a werewolf movie – and in a way it is, but this is not the traditional werewolf movie you expect going in; in fact the word “werewolf” is never used in the film to my recollection. The beast is not a werewolf, but some of the lore is still there to hint towards it; which makes for a really nice twist on the legend. Some might find the film a bit slow-moving, even tedious if they are used to modern blockbusters.  But honestly, I think I prefer what Ellis has done here over useless false-frights many directors use in an effort to fill an imaginary “scare quota”. Plus, the unrushed sections of the film make the harrowing scenes that much more shocking and believable.  I’m typically disappointed in monster movies, so I was prepared to be disappointed… yet pleasantly surprised to be impressed. While I did not find this to be a terrifying film, there is plenty of creature action and gore to please those of both monster movies and slasher films.  If the opportunity were to present itself, I’d very much like to see Sean Ellis create the prequel to this so we could see his own unique imagining of what happen with the Beast of Gévaudan!