As a kid growing up in Olathe, Kansas I would anxiously await Friday nights to sit in front of the television and watch scary movies presented by KCTV-5 in Kansas City – it was called “Friday Fright Night” and it still lingers in my brain with pleasant memories of schlock and b-movie scares.  No horror host, just the big voice guy who did all of the TV station promos and announcements putting on a creepy voice with an echo effect to take us in and out of the commercial breaks.  It was cheaply done, no real creativity in it at all, but I loved it because even back then I enjoyed hearing voice work – and I enjoyed watching horror flicks. 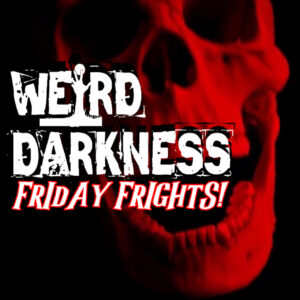 “FRIDAY FRIGHTS” is not what I’ve just described above though. I only mention the above because I really wanted to call this feature “Friday Fright Night” but someone had already grabbed that URL and likely the trademark for it as well.  I thought about calling it “Friday Night Frights” but, yeah… someone beat me to the punch on that one as well.  Fortunately, a few years ago I’d already looked into all of this and found “Friday Frights” available – so I snatched up the URL and figured someday I might do something with it!  And here we are.

I have had so much fun with the annual Halloween Live Scream shows that I wanted to find a way to do the live on-camera shows more often.  So, beginning in 2023 I plan to choose one Friday per month to grab a creepy story of fiction to narrate to you live on-camera via YouTube, Facebook, and Twitter.  It might be classic horror, science fiction, maybe a creepypasta, a novelette, or anything in-between.  And during the live stream I will take the occasional break to reply to your comments.