This particular picture, which is said to show just how big a South American ‘Goliath birdeater’ can get, has been bouncing around the internet for years… since at least September 17, 2007, which is the earliest I can verify finding it displayed.

The problem is that, even having tracked it back that far, I still have no clue of who took the picture, where they were, or when they did; and yet, at the same time, I’ve had a friend post the picture to Facebook as ‘real,’ when it’s basically unlikely they know anything more.

But I’ve learned a lot in digging backwards, and may be able to provide an answer.

It was determined by the Guinness Book of Records in 2011 that the South American “Goliath Birdeater,” a huge relative of tarantulas, was by weight the largest species of spider in the world. There are a few contenders that come close to the overall size of the Goliath — particularly the now-extinct Hercules Baboon spider (another tarantula) of Africa — but none come close in weight to the Goliaths.

It’s extremely rare for the spiders to be run across in the wild, which is why a big deal was made in 2014 when a scientist on a nighttime walk in the rainforests, Piotr Naskrecki, ran across a large wild specimen. Naskrecki caught the female spider and then had her euthanized for the collections at the University of Guyana.

The name “bird-eater” is not really deserved. As Naskrecki pointed out, Goliaths tend to roam on the ground… so they’ll eat a bird if they get one, but it’s pretty unlikely a healthy bird is going to be a snack. The general idea that some spiders did, in fact, hunt and eat birds was first really proposed in the early 1700’s, when the German scientific illustrator Maria Sibylle Merian portrayed such. 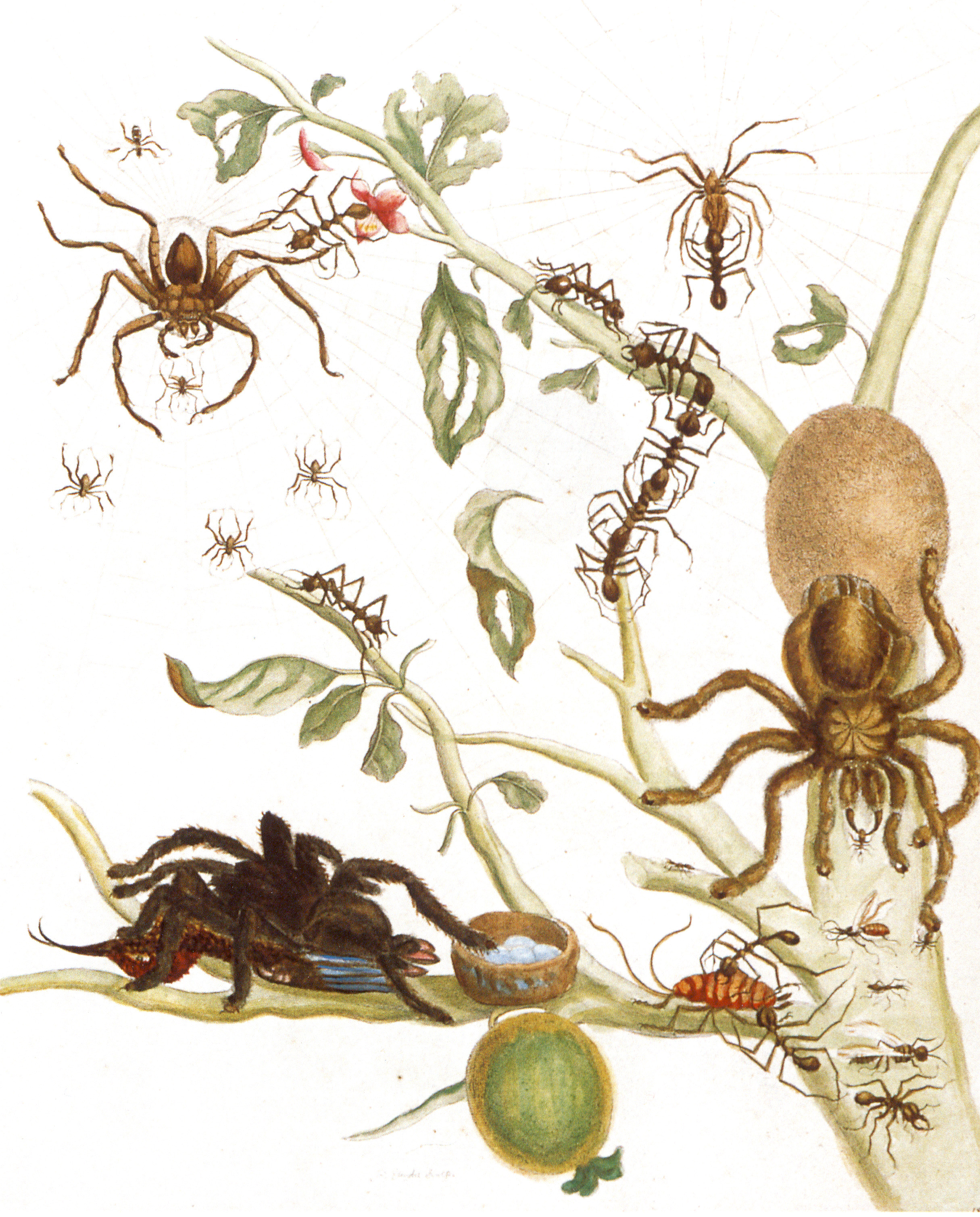 Look at the spider in the lower left… [Larger version here]

Merian portrayed a spider eating a hummingbird in a famous illustration she created in 1705; the idea became well known because of how popular Merian’s work became (and still is). Why she included this particular scene is something I can’t tell you: perhaps she actually saw it happen, or perhaps she was told it happened; in any case, it’s very unlikely she would have invented it, since the point to her illustrations was to be accurate. It’s now assumed that the name “birdeater” attached itself to the Goliath spiders mainly because their size makes them seems likely for the job. But exactly how big do Goliaths get?

The actual size of the Goliath spiders is generally described as “the size of a dinner plate.” They can have a leg span of 12 inches, and a body the around the size of a fist; the largest known captive-bred Goliaths had a body that measure 4.7 inches in length. None re-examine the first picture, and remember that the 12 inches of leg span is measured with the spider’s legs out-stretched… the spider in the picture should be roughly the same size as the person’s open hand, not twice that.

In short: this is either an incredible arachnid specimen, or it’s a fake.

It may be just a coincidence, but the four earliest appearances I could trace of the photo were all in French language websites. If the image first appeared in French sites, it might have taken a while to spread out to other language sites.

Many photos that have made this leap before have lost their original stories, as new stories were assigned to the interesting images in their new language presentations by people who couldn’t read the original story… but that doesn’t seem to be the case here, as none of the French sites give any sort of explanation for the picture other than assigning the species to a Goliath spider. And in the comments to the post on the earliest of the four sites there was a combination of amazement at the spider’s size, and a statement it was likely a fake.

And, at the moment, that’s where the situation stands… but I will add one more thought to the overall matter, however. It’s odd that the only copies of the photo are actually quite small for standard photos of interesting objects from 2007; phones and digital cameras averaged much higher than the mere 640 pixels across that photo can be found in — all larger copies I’ve examined are just blown up copies of the smaller image.

So consider this: if you put an enlargement of a spider next to a smaller image of a human hand, one way to cover up the difference in quality would be to shrink the final picture until both objects looked just as sharp. Now look at the carpet fibers next to the hand and next to the spider.