One of the fun sights to explore when visiting Rome is known as Bocca della Verita, or the Mouth of Truth. Legends speak that it will bite off the hands of liars.  Below are 10 interesting facts about this mysterious and ancient marble mask.

1) The Mouth of Truth (Bocca della Verita) is a large marble mask believed to depict the face of the god Oceanus. Oceanus was an important god to the ancient Romans. He was the divine personification of the sea which encircled the world and the father of everything.

2) The diameter of the Mouth of Truth disc is about 5 feet 9 inches.  It’s believed to be over 2200 years old and weighs almost 2900 pounds. The mouth, eyes, and nostrils of the mask are open. 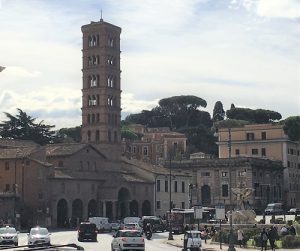 Church of Santa Maria in Cosmedin

3) Currently, this mysterious piece of marble is displayed in the portico of the church of Santa Maria in Cosmedin, Rome, near the river Tiber, and across the street from the Temple of Hercules Victor.

4)Legends state that if you stick your hand within the mouth of this sculpture, and you have sworn falsely in front of it, the jaws of the mask will quickly close, biting off your hand.

5) The legend was made popular by the movie Roman Holiday starring Audrey Hepburn and Gregory Peck. In the 1953 film, the characters are shown placing their hands in the Mouth of Truth reluctantly. They were fearful their hands just might be bitten off!

6 )But the origin of the legend is unknown. A few old stories suggest the legend dates to around the 15th century. One story involves a woman suspected of betraying her husband.  When standing in front of the Mouth of Truth, she had to swear she never kissed another man, and then put her hand inside the mask’s mouth.  If telling the truth, nothing would happen.  If lying, the mouth would clamp down and she would lose her hand.  Just before she began to speak, a man believed by the crowd to be crazy ran up to her and kissed her. Unknown but to herself, it was that of her lover. She adjusted her sworn statement to the fact she had never kissed another man except that of the crazy man seen by all. When she placed her hand inside the mouth, she was found telling the truth.

7)Also unknown is the original purpose for the artistic disc. The Mouth of Truth wasn’t always at the church, but brought there sometime before the 17th century, and possibly as early as the 13th century. Where it was first placed and how it was used is a mystery.  Many theories exist.  These range from a decorative fountain face, a drain cover, sacred well cover, or a drain to collect blood from the sacrifice of cattle in the Temple of Hercules. 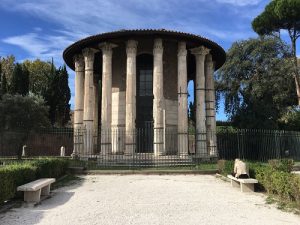 8) The most common theory is that it was a drain cover inside the Temple of Hercules Victor which had an oculus, or opening in its ceiling.  Rainwater would then flow into the openings of the disc placed on the floor, draining it away.  This is purely a theory, and we may never know the truth of the matter.

9) Some researchers feel the face could be that of Pan, instead of Oceanus, because they feel the face depicts horns, instead of crabs along the top edge.  This is unlikely, however, as Oceanus is known to be depicted with horns, represented as the claws of a crab.

10) There is a full size replica of the Mouth of Truth at Alta Vista Gardens in California, in the Leonardo da Vinci International Airport (Rome), and other places.  There are also similar works of art from around the world which were inspired by the disc.

The Mouth of Truth continues to fascinate and attract people who are daring enough to test its legend.

We passed the test and came back with our hands!  However, the mystery of it’s origin remains as mysterious as ever.  It can be assumed the Mouth of Truth will never speak a word about that to us, so it seems this will always be a mystery.  Don’t you love it! 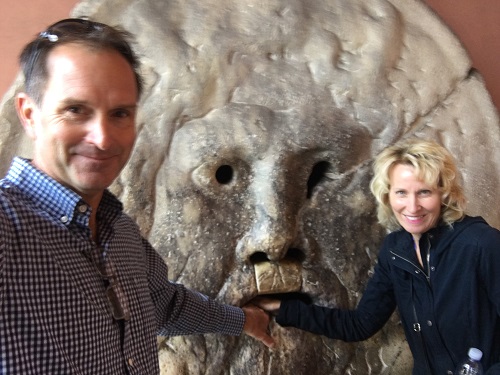