This is not dark, or weird in the least – but totally worth posting.  Thanks to Good News Network for sharing this story! — Darren

We wanted to bring you this sweet reminder of a Halloween story to show that this costumed holiday in America is not all ‘tricks’—there are a lot of ‘treats’ of kindness, too. 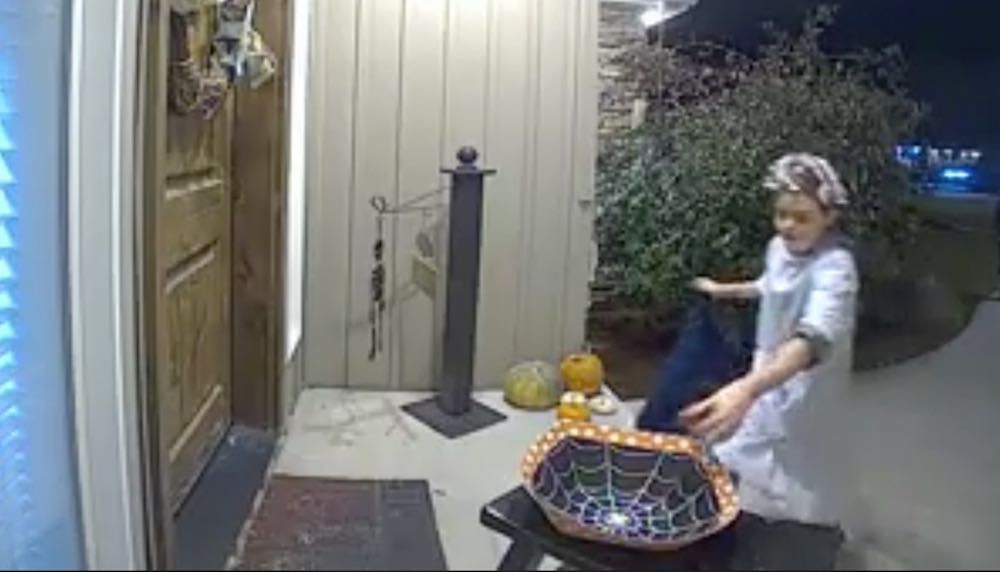 Anyone who has ever been trick-or-treating before is familiar with the sensation of seeing a bowl sitting out on a household’s steps, promising candy – only to discover that it’s empty.

Hayden Chapple of Idaho Falls experienced this exact same scenario while trick-or-treating on Halloween last year, except he responded to it by doing something that was even more awesome than his costume.

The Robertson family had left the bowl of candy out on their stoop so they could take their daughter trick-or-treating. They also left a sign that read “Do a trick and take a treat! And smile – you’re on camera”.

The Robertsons say that they like leaving out the camera because it is fun to review the footage later and see the kids making goofy faces and doing little stunts. When they were playing the video later that night, however, they were disappointed to see one of the kids taking the rest of the candy and leaving the bowl empty.

But they weren’t disappointed for long – after a few minutes, Hayden walked up to the bowl with his mother Heather.

11-year-old Hayden, who was dressed as Eleven from the Netflix series Stranger Things, saw that the bowl was empty, did a little jump-twirl as a trick, and started to walk away. Then, he saw that there were some other children coming towards the house.

Not wanting them to find the empty bowl of candy, he doubled back and left some of his own “good candy” – a few different flavors of Skittles and a Snickers bar – for the next group of kids.

Hayden later recalled that he did not even think that there was a camera watching him. He thought that the Robertsons had made it up to deter kids from stealing the candy.

“He’s pretty excited but it’s kind of shocking because it’s not really anything out of the ordinary for him,” Heather told East Idaho News. “He was just hoping the homeowners would have seen his awesome trick.”

She is also happy that the Robertsons shared her son’s good deed to the world because she is proud of her son being such a good example for others.

“They could have just as easily posted the video of the kid stealing the candy,” she says. “It was very nice of them to put up the positive video.”