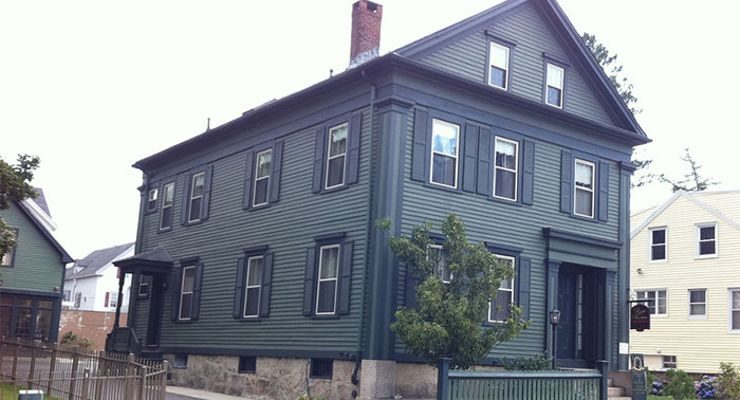 All the changes in the world can’t hide the feeling of wrongness.

Crime buffs are a unique bunch. They like to visit the scene of notorious crimes to see just where it all went down. Does the location look the same? Has it changed drastically? Is it gone? It may sound sick and twisted to some, but many spend their free time doing this for fun. Below are 8 infamous crime scenes and what they look like today.

Unspeakable horror befell the people who entered apartment 213 in the building that stood on this now-vacant lot. Serial killer Jeffrey Dahmer murdered and cannibalized over a dozen men here before his arrest in July 1991. When authorities arrested Dahmer and searched his apartment, they discovered human heads, bones, and organs in the freezer and  bedroom. Dahmer was sentenced to life in prison. He was murdered by another inmate in 1994.

Many call H.H. Holmes America’s first serial killer. Holmes built a massive “castle” on Chicago’s South Side and lured visitors to Chicago’s 1893 World’s Fair to stay at his building. Many of these guests never left Holmes’ house of horrors. Police discovered that Holmes had transformed his home into a killing factory, complete with soundproof rooms and a cremation oven in the basement.

Holmes was arrested in Boston in 1894, and hanged in Philadelphia in 1896. The castle was demolished in 1938. A U.S. Post Office was then built on the site where an unknown number of victims met their fate at the hands of H.H. Holmes.

Now this is a famous location that crime buffs can really enjoy. The house where Lizzie Borden may or may not have killed her father and stepmother with an axe in 1892 is now a bed and breakfast. Borden was acquitted of the grisly crimes, but her name will always be inextricably linked to bloody murders.

The 1947 murder of Elizabeth Short, known in the press as “The Black Dahlia,” shook post-war Los Angeles, and remains one of the city’s most notable unsolved crimes. Short, 22, was an aspiring actress when her dead body was discovered cut in two in a vacant lot. As you can see, Short’s dumping ground has changed quite a bit in the 70 years since her gruesome murder.

Another highly publicized crime in LA, the 1994 killings of Nicole Brown Simpson and Ronald Goldman remain officially unsolved, but football legend O.J. Simpson remains the prime suspect. Simpson and Goldman were stabbed—Simpson was almost to the point of decapitation—when their bodies were found in the front walkway of Simpson’s posh condo in LA’s Brentwood neighborhood. The condo sat empty for two years after the murders before it was finally sold. The new owner changed the address to discourage sightseers.

Gacy was one of the worst serial killers in American history, preying on young men until his arrest in December 1978. Gacy murdered over 30 men and boys and buried them in the crawlspace of his Chicago home. The excavation of the home stunned even the most veteran Chicago detectives. The house was torn down shortly after the extensive search, and the lot sat vacant for nearly 10 years until a new house was built in 1988. A quaint suburban home now sits on the site where Gacy terrorized his victims. Gacy was put to death by the state of Illinois in 1994.

The horror movies based on a supposed haunting get all of the attention, but the true story behind what happened at this beautiful home on Long Island truly is the stuff of nightmares. In 1974, Ronald Joseph “Butch” DeFeo Jr. murdered his parents and his four siblings in the home. A couple later moved into the home and claimed they fled because of disturbing hauntings, which led to the book The Amityville Horror  and then to the endless stream of films.

The 1932 kidnapping of famous aviator Charles Lindbergh’s baby son was once dubbed the “Crime of the Century.” The young boy was snatched from the family’s sprawling estate and sadly was found dead three days later. The crime was eventually linked to Bruno Richard Hauptmann, a German immigrant executed for the abduction and murder in 1936.