Children of the ’90s likely hold Disney’s 1994 cartoon series Gargoyles close to their hearts. The animation made the ornately carved and sour-faced building toppers seem like Avengers coming alive at night to fight crime. The popular television monsters weren’t real gargoyles, though; they were grotesques.

While gargoyles are embedded deeply in popular culture through appearances in movies and television shows, their real origins remain elusive. They may have first appeared around 1000 CE, centuries before their animated counterparts came to life on the small screen. 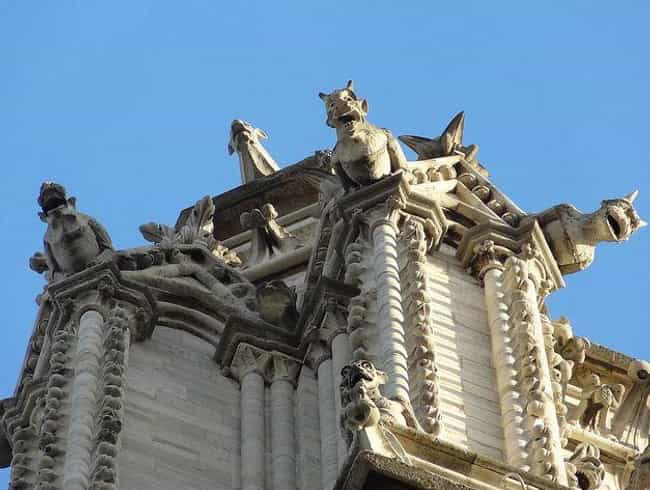 Ancient Churches Used The Sculptures To Frighten And Attract People

According to author Gary R. Varner’s book Gargoyles, Grotesques & Green Men: Ancient Symbolism in European & American Architecture, the gargoyles emerged as popular church additions around the year 1000. While the church in the legend of La Gargouille used a dragon’s head to protect the building, many holy structures used gargoyles to terrify citizens into attending services.

Another theory suggests the imps with demonic features lived on the outside of the church, so people felt safer inside the church than outside of it. Other people theorize gargoyles were meant to look like pagan gods. The pagan symbols could purportedly attract even more people to the congregation. 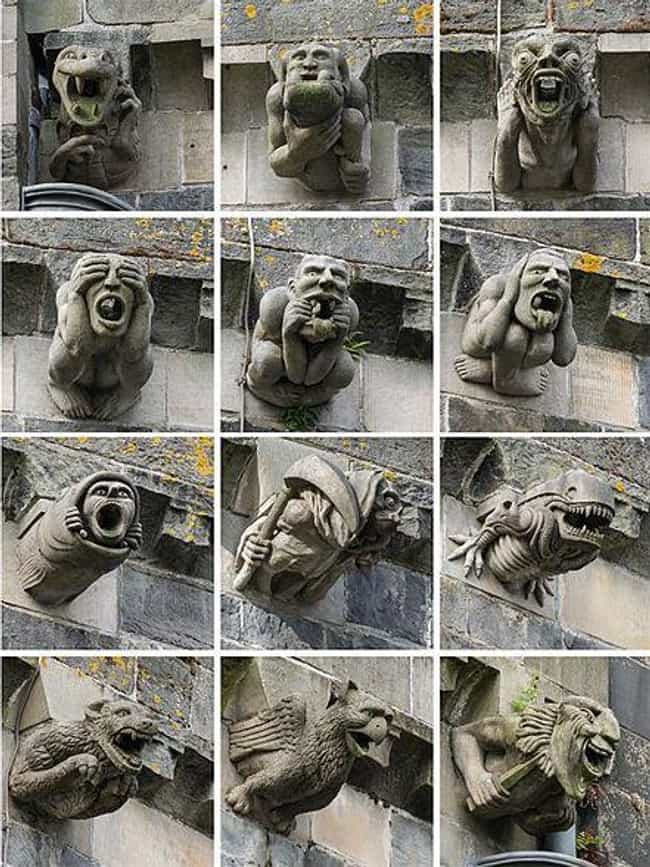 Not Every Building Sculpture Is Actually A Gargoyle

Two types of carved statues can be found perched atop buildings: grotesques and gargoyles. People may confuse the two or simply call all the grimacing imps gargoyles. In fact, the so-called gargoyles from the 1994 Disney cartoon were actually “grotesques” since they lacked one crucial function: the ability to drain water from the structure they guarded.

Initially, gargoyles were only meant to drain water away from intricate stonework behind them via a spout in their mouth. Thus, every stone watcher that serves this purpose is a gargoyle—and any without is, simply, a grotesque. 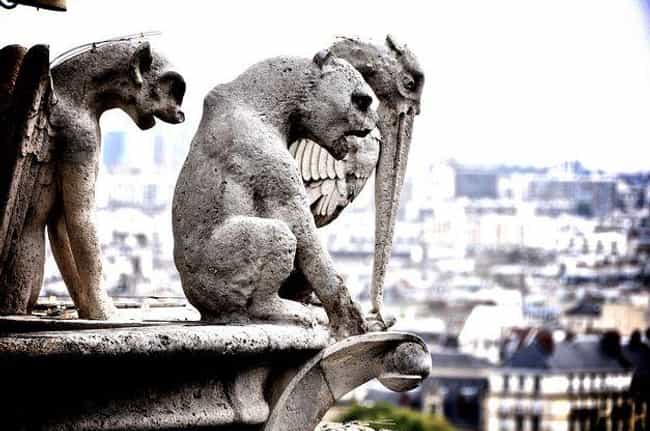 Anything Can Be A Gargoyle

Grotesques can be carved into the shape of chimeras, human faces, or animals. In this light, in the 1980s and ’90s, pop culture characters emerged on grotesque carvings. Many of the gargoyles and grotesques look humorous, like the human figure in Wells, England, with a wide, mocking mouth.

There are also corbels, support structures that are sometimes fashioned into human faces. One gargoyle even drains water from his backside. 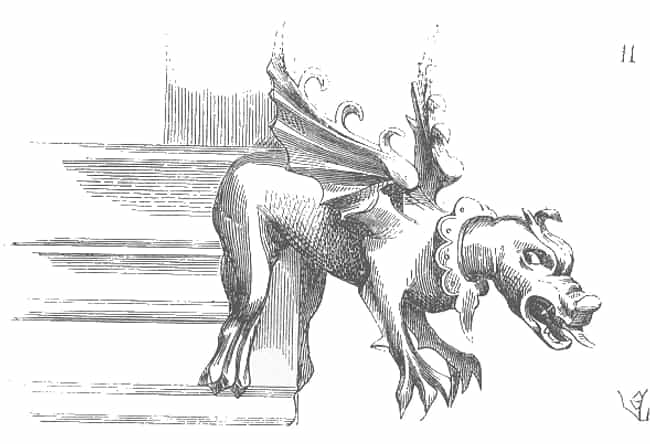 The Legend Of La Gargouille Is About The First Gargoyle

“Gargoyle” comes from the French word gargouille, which means “throat.” An origin story, the legend of La Gargouille, is French, as well. In the tale, La Gargouille the dragon intimidates townspeople who live near the River Seine, breathing fire, eating ships, and expelling flood water from its mouth. In an attempt to appease the fierce monster, the plagued people sacrifice themselves.

Around the year 600, a priest named Romanus arrives to take care of the beast if the community promises to build and attend his church. After Romanus dispatches La Gargouille with a crucifix, they try to burn the body. Everything but the head and neck turn to ash. So, the newly constructed church mounts the head to keep evil at bay.

Celtic People Had Their Own Version Of Gargoyles

Author Darlene Trew Crist mentions in her book American Gargoyles: Spirits in Stone that a Celtic hunting tradition may have inspired gargoyles. Supposedly, hunters in Celtic clans believed the heads of the animals could grant protection. In order to “attract luck and repel evil,” the hunters mounted the heads of their prey on pikes and sharp sticks, encircling their homes with the trophies.

After some time, the hunters started placing the heads directly on the outer walls of their homes and other buildings. Churches supposedly took notice and adopted the tradition.

The Notre Dame de Paris – and its spectacular French Gothic architecture – is a popular tourist destination. While the cathedral’s construction started in the 1200s, the gargoyles didn’t emerge until the 1800s. In fact, Notre Dame was in poor shape when Victor Hugo released Notre Dame de Paris or The Hunchback of Notre Dame in 1831.

A renewed interest in the grand building inspired the lead French architect in the country’s preservation initiative to restore it to its former glory. In 1843, Eugène-Emmanuel Viollet-le-Duc created the gargoyles and grotesques in the style of old.

During the restoration project, Viollet-le-Duc added a second spire to the cathedral, statues of the apostles, and chimeras.

Gargoyles don’t only exist on Western churches. Ancient Egyptians, Greeks, and Romans used the statues to adorn their temples. In Egypt, stone lions sat atop structures to appease the god Seth. These pieces were more like grotesques, as they did not route water away from the building. Travelers wishing to see the lion heads can visit the Temple of Hathor in Dendera.

The Greeks and Romans also integrated lion carvings along with chimeras and other mythological animals in their places of worship. The temple of Zeus in Olympia still has lion gargoyles made of marble perched on the roof.

Many Existing Gargoyles Are Recreations Of Destroyed Originals

Many original gargoyles were constructed of things like marble, terracotta, or wood. Since their real purpose was to serve as rain spouts, the carvings endured centuries of downpours, snow, sun, and other damaging elements. As the creatures fell apart – and off of buildings – architects began carving new gargoyles in Gothic style.

Most of the gargoyles on grand buildings are relatively newer replicas of their original counterparts, while those on the Notre Dame de Paris in France and the Cologne Cathedral in Germany didn’t arrive until the 1800s.

Thanks To A Gothic Revival, Pittsburgh Houses Many Gargoyles

It wasn’t only the ancient cathedrals of Europe that enjoyed a Gothic renaissance in the 1800s. In America, Pittsburgh, PA, caught gargoyle fever and added several to various churches. The town quite possibly has the most substantial amount of impish statues in the US, with nearly 20 original gargoyles and more than 100 grotesques.

Multiple buildings and restaurants have grotesques jutting from the architecture. Lions, winged dragons, aquatic beasts with sharp teeth, and other creatures dot the city. Pittsburgh even offers walking tours so guests can glimpse the structures.

Construction on two west towers on the Washington National Cathedral started in the 1980s, and a National Geographic World contest allowed creative kids to submit sculpture designs for the building. Third place winner Christopher Rader’s Darth Vader submission was carved into the cathedral for all to see. The Vader is a grotesque, as it does not drain water.

Spotting it without binoculars is difficult. Visitors should head to the northwest parking lot to view the carving; Vader sits between two pinnacles and under a gablet.

The Washington National Cathedral isn’t the only church holding a pop culture reference. Scotland’s Paisley Abbey, for instance, is home to a gargoyle Xenomorph – the antagonist of the Alien movie franchise. In 1993, meanwhile, Chapelle de Bethlehem underwent renovations for crumbling towers and carvings, prompting stone carver Jean-Louis Boistel to include as many popular characters as he could in the new architecture.

Grendizer, a robot from Japanese anime UFO Robot Grendizer, adorns the chapel in place of a heroic knight. Gizmo, the adorable Mogwai from Gremlins, is joined by one of the evil gremlins to embody the good and bad inside everyone.

They Inspired Literature, Movies, And Television

Apart from inspiring a revival of Gothic architecture, gargoyles influenced pop culture. Disney released the cartoon Gargoyles in 1994, turning the winged beasts into heroes that slept during the day and roamed at night. Disney also used gargoyles as the sidekicks for Quasimodo in the 1996 animated movie The Hunchback of Notre Dame, based on Victor Hugo’s novel.

In 1972, the TV movie Gargoyles aired on CBS. The horror film featured the debut of special effects artist Stan Winston. The titular creatures torment an anthropologist and his daughter, reaffirming the sinister potential of the figures with twisted visages. The 1990 Tales from the Darkside: The Movie includes a story called “Lover’s Vow.” In it, a gargoyle swears a diabolical man to secrecy.

Additionally, the video game series Castlevania features gargoyles as enemies that seem like stone statues before coming to life and attacking.