Most people are familiar with Scotland’s Loch Ness Monster, affectionately known as Nessie. She might be the most famous aquatic beast, but Nessie is the star of just one of many lake monster urban legends. In fact, there are plenty of United States lake monsters with their own stories and sightings. From a half man, half goat in Texas that reportedly loves to swim and climb trees to the legendary Lake Champlain Monster in New York, the list of lake monsters within the US extends beyond your wildest imagination.

Are lake monsters real? Or are the reported sightings just fabricated tales meant for your amusement? Although some believe these creatures are nothing more than great camping stories, others have supposedly witnessed the creatures in person and have no doubt about their existence. 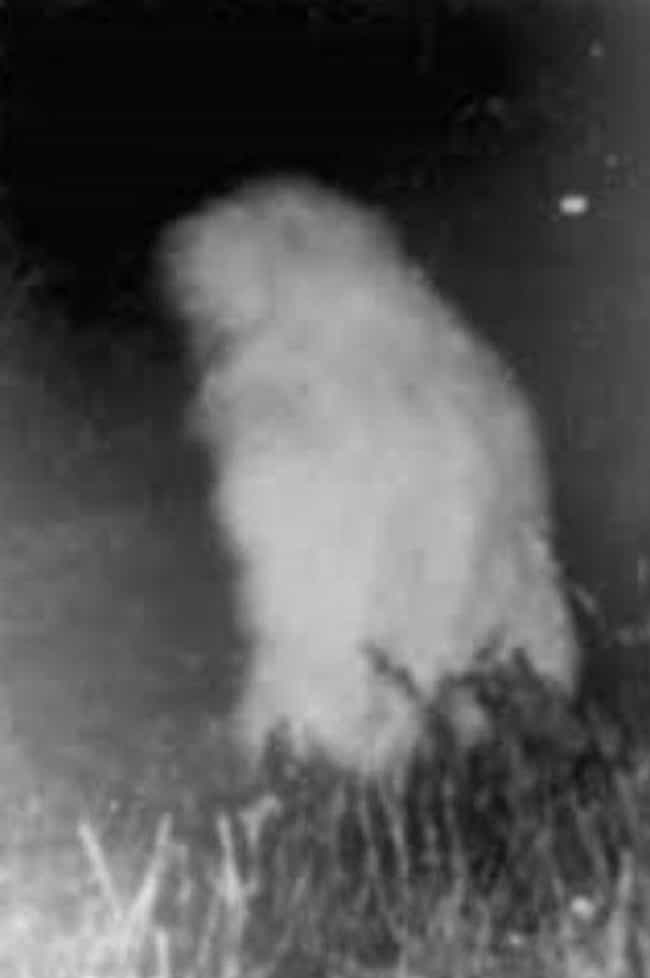 Texas: The Half Man, Half Goat Lake Worth Monster

In 1969, one of the standard places for teens from Lake Worth, TX, to hang out was near Greer Island, right off Shoreline Road. During the summertime, kids would go on dates near the lake. On July 9, 1969, three couples were parked in the area when they reportedly spotted a creature in a gathering of trees. The monster allegedly jumped on their car, and attempted to grab one of the female occupants. They were able to get away unscathed, but an 18-inch gash was left on the side of the car.

The following night, another group of people supposedly spotted the monster at the lake, including local deputies. Reports stated the beast appeared to be angry and even threw a tire 500 feet. The group promptly left the area, fearing they would be attacked. 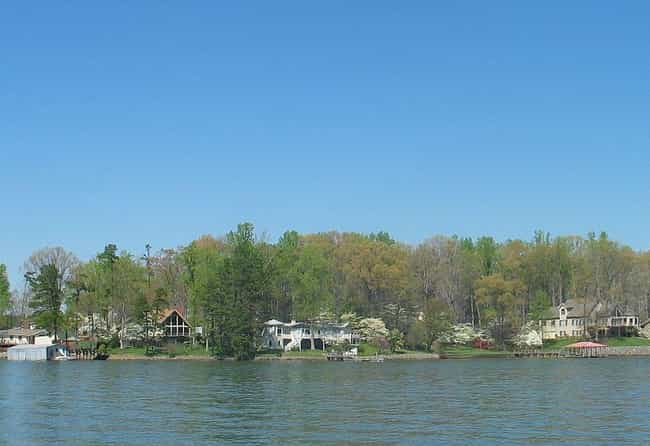 Locals around Lake Norman, NC, have reported seeing a dinosaur-like creature nicknamed Normie for around 50 years. Those who claim to see Normie believe there is a close resemblance to the famed Loch Ness Monster.

Despite the many sightings, most feel that Normie is probably an oversized catfish or possibly an alligator. A diver who was exploring the lake in the 1990s remembers seeing an odd creature and noting:

It was at least 8 feet long and 3 feet across the mouth. We hovered in the water for a good five minutes with our lights on it, not believing what we were seeing. I’ve never seen a freshwater fish that big. The only thing it did was to pump its gills and open and shut its mouth slowly, like it didn’t even see us. 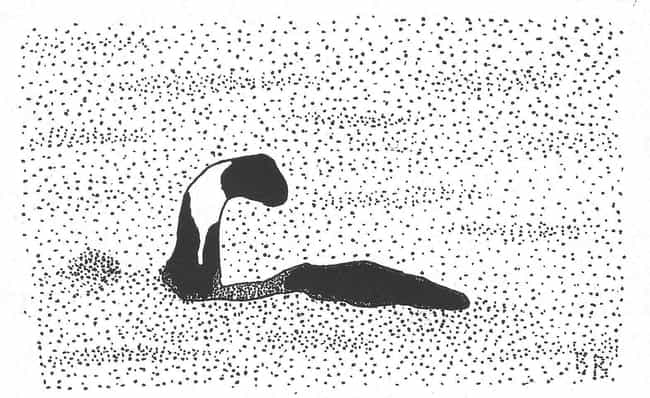 Lake Champlain is over 100 miles long and borders New York and Vermont. In 1873, newspapers reported a sea monster living in the lake. The first piece mentioned railway employees working near the lake and claiming to see a massive serpent with a flat head and silver scales emerging from the water.

Around that same time, a steamboat carrying tourists claimed to have hit the sea monster which nearly caused the boat to turn over. The sightings only increased from there and the monster was nicknamed “Champ.”

In 2003, there were at least three sightings of Champ, and the Discovery Channel featured a special on the creature called “America’s Loch Ness Monster.” 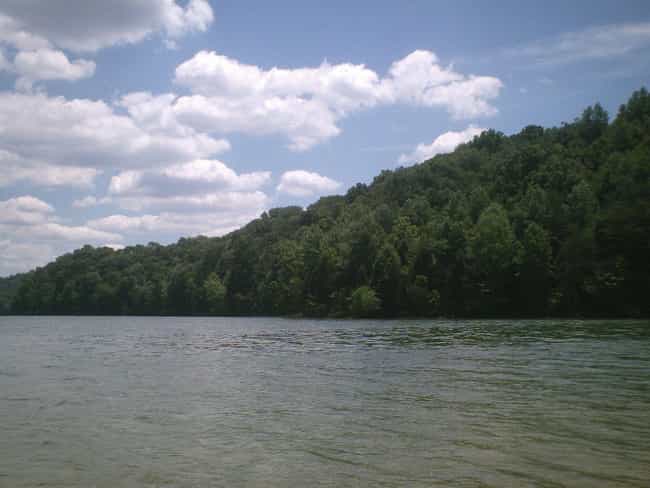 Lake Herrington is a man-made lake located in Mercer, Garrard, and Boyle counties in Kentucky. The lake is a favorite fishing spot, known for its large variety of wildlife – including a strange creature that resembles an eel-pig hybrid. There have been sightings of the beast since the 1920s, but it wasn’t taken seriously until Professor Lawrence S. Thompson of the University of Kentucky reportedly encountered the eel-pig swimming near his lake house on numerous occasions in 1972.

Witnesses describe the creature as being approximately 15 feet long with a body of an eel, the snout of a pig, and a curly tail. There has been much speculation over the years whether Herry (a nickname taken from Lake Herrington) is merely an alligator or even an unknown fish species.

In 2009, Greg Reynolds and Dan Serrano, nonprofit workers who clean waterways in the Palm Beach area of Florida, were contacted to remove a log from the Lake Worth Lagoon. The men arrived to remove the log, but instead they found what they could only describe as a sea monster.

Reynolds was able to record video footage of the creature, which he uploaded to his company’s website. The footage eventually went viral, with news stations reporting on what was later named the Muck Monster.

The first mention of the Bear Lake Monster was a written account in the Deseret News in 1868 by a man named Joseph C. Rich, an Idaho politician and judge. Rich noted that the monster was referred to as a “water devil” by Native Americans, and that locals in the area had seen the beast, which resided in the waters of Bear Lake on the Utah-Idaho border. The monster was described as a serpent-like creature with the head of a walrus or dinosaur and prominent ears.

Although Rich allegedly recanted his story about the Bear Lake Monster, the sightings continued and many others came forward and claimed to see the monster themselves. In fact, there were reports of several different monster sightings in 1868 in the area, including multiple sea creatures. The sightings have only grown over the years.

The most recent known sighting was in 2002, when a watercraft rental owner Brian Hirschi claimed to have seen a monster. Hirschi was anchoring a boat when he saw what looked like “two humps in the water.” Hirschi then said something lifted his boat up, revealing a slimy, serpent-like creature with red eyes. After lifting the boat, the Bear Lake Monster apparently swam away.

Flathead Lake is located in northwest Montana, and if rumors are true, it is home to the Flathead Lake Monster, a creature similar to the Loch Ness Monster. The first supposed sighting of the monster was in 1889, by a boat captain named James Kerr and his crew. The crew shot at the lake monster with a gun but were believed to have missed.

Since the first sighting, there have been 97 instances of people claiming to see a creature resembling an eel that is approximately 20-40 feet long with deep black eyes. Jim and Julia Manley reported seeing the monster’s humps when they were stranded on Big Arm bay within Flathead Lake in 2005.

Indiana: The Beast Of Busco

In 1898, Oscar Fulk, a farmer from Churubusco, IN, claimed to see a giant turtle on a lake located on his property. Although Fulk told many people about the sighting, it didn’t attract much attention.

In July 1948, two men, Charley Wilson and Ora Blue, were fishing at what used to be Fulk’s lake, and they too spotted the colossal turtle, which they estimated to be around 500 pounds. The sightings of the turtle began to grow, and by 1949, there were several news articles dedicated to discussing the turtle. The beast was named Oscar, after the original man who spotted it; it was later nicknamed the Beast of Busco.

The man who took over the farm from Fulk, Gale Harris, attempted to drain the lake as well as send deep-sea divers into the water in an attempt to prove Oscar’s existence. The creature has yet to be captured.

Lake Chelan is located in Chelan County, WA. For many years, there have been sightings of a dragon-like creature residing in the lake, which is believed to be male.

A local newspaper reported on the Lake Chelan Dragon in 1892, after a man was supposedly attacked by the dragon while bathing in the water. Two of the man’s friends were able to drag him to shore with the dragon still chewing on his legs. The dragon was said to have the body of an alligator, the head of a snake, and bat wings. The men attempted to help their friend by stabbing at the creature, throwing rocks at it, and eventually trying to set it on fire, but the dragon allegedly flew away and dove into the lake, taking their friend with it.

Throughout the years, there have been several reported sightings of the Lake Chelan Dragon. There is even a legend surrounding how he got to Washington. Apparently, in 1812, a pirate ship smuggling a treasure chest and two mermaids was washed into Lake Chelan by a violent storm. The chest was sent overboard with its contents: an egg that hatched the dragon of Lake Chelan.

Walgren Lake, formerly known as Alkali Lake, is located near Hay Springs in northwestern Nebraska. The lake was once said to be home to the Alkali Lake Monster, a giant creature anywhere from 40 to 100 feet in length, resembling a horned alligator, and known for leaving a terrible stench behind.

Tales of the Alkali Monster can be traced back to newspapers from 1922. One year after the first reports, people camping in the area claimed to spot the monster, and livestock farmers blamed the creature for eating their animals. Since there have not been any recent sightings of the monster, some believe it was a creative tale invented by a newspaper reporter who had a flair for the dramatic. Still, other townspeople have embraced the legend.

Rock Lake is located 20 miles from Madison, WI, and is the alleged home of the lake monster called Rocky. In 1867 a man named Harbeck was at Rock Lake and saw what he later described as a “saurian” or a lizard-like creature. Frightened, Hassman took a spear and stabbed it, but claimed he could “no more hold it than an ox.”

In 1882, Ed McKenzie and D.W. Seybert were at Rock Lake racing one another in rowboats when Rocky reportedly rose above the water and frightened the men. They shouted for help, and a man nearby came to their rescue. Witnesses on shore confirmed that they too saw creature which apparently disappeared, unharmed.

Rocky has also been spotted at Red Cedar Lake, just a few miles from Rock Lake, and has allegedly gone on hunting sprees along the shore, killing the livestock of the local farmers. There are even Native American legends from the area that tell of a “a huge and terrible monster… a creature that had a large head, awesome jaws, and body likened to a serpent.”

White River Monster sightings began in 1915, when local farmers noticed a creature reportedly “as wide as a car and three cars long,” which resembled a humongous catfish. In 1971, the White River Monster resurfaced and witnesses reported seeing the giant fish, going so far as to describe its exact features. One person claimed to have heard the creature making strange sounds like a combination of a cow’s moo and a horse’s neigh. Another said “it looked as if the thing was peeling all over, but it was a smooth type of skin or flesh.”

There were so many reports of the White River Monster throughout the 1970s that the Arkansas State Legislator passed a law banning citizens from harming or killing the creature. Biologists believe that the it could possibly be a large elephant seal, an animal that is not at all common to the area.