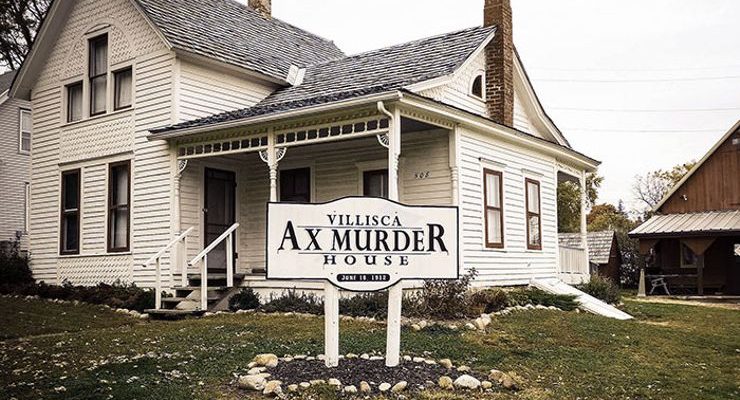 Want To Put Some Scare Into Your Summer Vacation? Stay At One Of These Locations!

Spend your summer with some chilling company at these haunted places around the country.

While you’re hitting the road this summer, you may find yourself hoping to see a ghost or two. Lucky for you, there are plenty of places across the United States that are well known for having less-than-lively residents. These haunted places are some of the best and eeriest places to explore this summer, from coast to coast and in between.

Often called America’s most haunted hotel, the Crescent Hotel was built in 1886. Over the years, the Crescent has had a number of identities that have left it filled with ghostly presences. First meant as a resort for the wealthy, the Crescent didn’t exactly thrive. It soon ran out of clients, closed, reopened as a college for young women, closed again, then became a health resort run by a quack—basically, picture A Cure for Wellness. Many of the people who sought cures for cancer and other health issues are rumored to haunt the Crescent’s grounds to this day. Even after the health spa was closed, the Crescent continued to suffer misfortunes, nearly burning to the ground in 1967. Today, you can take a ghost tour at the hotel. The truly brave can stay overnight.

The bloody history of Bobby Mackey’s Music World includes murder, suicide, and claims of a Satanic sacrifice that ripped open a portal to Hell—which you can visit today in the honky tonk’s basement. The murder dates back to 1896, long before Bobby Mackey’s opened its doors, when the site was occupied by an old slaughterhouse. It was near this structure that the brutalized body of a young woman with its head missing was discovered. Soon, Pearl Bryan, the daughter of a wealthy farmer from Indiana, was identified as the victim, seemingly murdered after a botched abortion. Pearl’s boyfriend and his friend were eventually charged with the slaying and hanged for her murder. Pearl’s spirit roams the Music World to this day. With all that in mind: Who wants to go dancing?

We scarcely need to tell you the story behind this haunted house, but just in case you’ve forgotten: Someone took an axe to Lizzie Borden’s father and stepmother in this Fall River home in 1892. Whether or not Lizzie was the culprit may never be fully settled, but the haunting of this home is for real. Many a visitor has attempted to spend the night at this home only to find themselves too unsettled to remain.

Kentucky’s Anderson Hotel is so haunted that it once shut down a paranormal investigation after its ghostly inhabitants got too riled up by the meddling of the investigators. Although the building is much more recent than many of the other entries on this list, it managed to rack up quite a dark history in its short life. According to Week in Weird, the Anderson played host to drug use, prostitution, and at least three suicides. While it’s been closed to lodgers for years, it seems you can still arrange a ghost tour/investigation via Kentucky Ghost Tours.

That said, if you are planning an investigation, bring your protective gear. Supposedly, one particularly peckish resident spirit bit into the side of a paranormal investigator. Yikes.

This retired British ocean liner is now docked in Long Beach, California, where visitors continue to report experiencing paranormal activity, whether they board the Queen Mary for an afternoon tour or stay overnight. For years, the most haunted room, Stateroom B340, has been off-limits to guests. Supposedly, the haunting there is so strong that the owners did not feel comfortable letting visitors stay. Earlier in 2018, they decided to start rentals. In addition to encounters in B340, people also report ghosts in and around the pool inside the Queen Mary.

Found in the heart of Austin, a vibrant, modern city, you might be surprised to discover that this gorgeous hotel has a haunted past. But the Driskill has quite a few ghosts roaming its premises, dating all the way back to its 1886 debut. Its most famous legend? That of Room 525. It was in this room that two different brides, separated by twenty years, allegedly committed suicide while on honeymoon. There is also a little girl haunting the halls, who, so the story goes, fell down the grand staircase and died from her injuries after chasing after her ball. You’ll hear her giggling and ball bouncing near the staircase.

Former jails and asylums have the best and most terrifying ghosts. Ohio State Reformatory, one of the most infamous prisons of the 20th century, is no exception. Although the Reformatory was meant to be built as a cutting edge rehabilitation center for convicts, it soon became infamous for torture, abuse, and even murder. From the hundreds of prisoners thrown into “The Hole” to the men murdered in their sleep, spirits around here aren’t just present—they’re palpable.

The Stanley Hotel is best known as the inspiration behind the Overlook, made famous by The Shining. But this Colorado hotel has its own haunted history. Unlike many other haunted locations, the Stanley’s ghosts are reputed to be benign, and sometimes even friendly. But the carpets may freak you out even if the ghosts are kind.

You can now visit and even stay overnight at one of the most infamous murder houses in America. In June 1912, someone entered a house in Villisca owned by the Moore family. Eight people were bludgeoned to death with an axe—two adults and six children. Although one man was tried twice for the murders, no one has ever been convicted. The spirits of the Moores and the two guests who happened to be staying over remain in the house to this day, perhaps hoping that their killer may one day be revealed.

This castle in Washington state was influenced by Tudor and Gothic styles, giving it an imposing structure that basically begs for some ghosts. Both the original owner of the house and his wife are said to still reside within its walls due to their immense love for the building. Visitors have also seen a young child standing by the property’s lake, who they soon realize is an apparition. Supposedly, this is the ghost of one of the former owner’s grandchildren, who drowned in the lake. You may also recognize Thornewood as the castle in Rose Red, a 2002 miniseries from Stephen King.