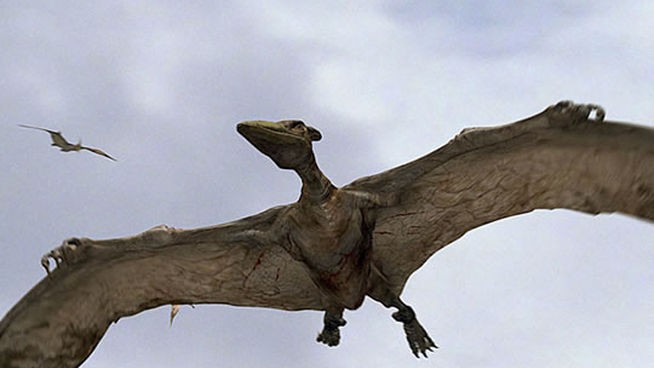 The Pterodactyl of Peoria

Does the Springdale Pterodactyl have friends?

Either that, or it has many faces and fashions. Those are the only logical conclusions after a report here about a prehistoric bird with a 30-foot wingspan above Springdale Cemetery. Readers have bombarded me with similar stories, collectively implying that Peoria secretly serves as a nest for mammoth flying beasties.

Local authorities have received no such reports. So how do you reconcile claims of a 30-foot wingspan? There’s nothing even close to that size, anywhere. The California condor is the largest bird in North America, with a wingspan of 9 feet. The Wandering Albatross can boast a wingspan of almost 12 feet, but lives in the Indian Ocean.

The obvious conclusion, then, about the 30-foot wingspan: Peoria has a new species of giant bird. Or, a flying dinosaur has slipped through a time warp. Duh.

That’s why Peoria should embrace these legends with tours, museum exhibits, bird hunts, whatever works. Paint the image on water towers. Splash it across T-shirts. Put a pterodactyl mascot in a wrestling match with that Rod Stewart impersonator. Sell that pterodactyl, Peoria, sell it. It makes sense, because readers vouch for the existence of The Springdale Pterodactyl:

Stephanie G.: I’ve seen this bird! We lived in a house in Alta Lane. We had a huge koi pond, with a dock. I was in the kitchen and it landed on our dock and sat there for about 5 minutes. I screamed. It was perched on the dock, as tall as a man. When it finally took off it flew directly over the pond. Its wingspan was as wide as the pond, about 20 to 30 feet.”

Stephanie H.: “It’s real. A friend of mine saw the bird about a month ago by the lagoon in Glen Oak Park. It spooked her so bad. The bird did not seem to be afraid of people.”

Suzanne: “I came out of Proctor Hospital, looked up into the sky and saw a huge bird. It was flying as high as airplanes. It was just a huge prehistoric bird. I didn’t report it because who would believe it.”

Another reader, Scott, says his wife and daughter spotted a slightly different bird: “They saw it near the train tracks behind the Journal Star. It was huge. I don’t know about the 30-foot wingspan, but it was bigger than an eagle. It looked like a gargoyle.”

Scary, eh? Mind you, that last location is exactly where Journal Star sports editor Kirk Wessler claims to have once seen a mountain lion. So, maybe 1 News Plaza is a breeding ground for all sorts of freaks of nature. Or just freaks.

Rick, another reader, says he saw a huge stork-ish bird while fishing near Banner Mash.

“It looked prehistoric,” he says. “It was standing there in the water, looking for prey. It was playing with its big ol’ talons.”

Because he was fishing, he didn’t bring his cell phone. So, no pics. After it flew off, Rick went home and did some research. The Banner bird resembled the big blue heron, which is indigenous to some Illinois waterways. But that species’ wingspan tops out around 61/2 feet, while Rick says the Banner bird’s wings were much longer.

“It look like it’s wings spread over the entire lake,” he says.

I contacted Scott Avery, a conservation police officer with the Illinois Department of Natural Resources. He says he could see how someone could mistake a great blue heron.

But Avery says he has heard of no reports of any massive birds – heron or otherwise – flitting through Peoria. And he can’t explain what people think they’ve seen.

“Unless they’ve been drinking,” he says.

Another reader, Leanne, says she doesn’t talk much about such things because people think she’s “crazy.”

“I frequently walk the woods that run through the cemetery,” she said. “A month or so ago my friend and I were in the woods and a giant bird swooped down, and its massive wings hit the trees on its way. I threw a rock in its direction, and it made a noise similar to a dog barking, then flew back up to where it came from. I’ve heard that barking noise coming from the same area every time I’m out there.

“I’m almost positive I know where it lives.”

Good enough for me. With her directions in hand, I ventured to a slice of near-Springdale woods that I’d never known existed. In fact, they’re really hard to find, let along climb up and down trails and hills there. I really didn’t know if I’d ventured onto Peoria Park District land, private property or a prehistoric creature’s lair.

As I startled ambling and rambling deep into the woods, I heard a dog barking – or, should I say, a dog-like barking. Could it have been a pterodactyl? Maybe I also heard a cat-like mewing, which could’ve meant I’d heard a cougar, too – or just a pair of house pets.

A few woodsy critters scurried around, and I was hoping to spot a chupacabra. If so, The Peoria Chupacabra is indistinguishable from The Peoria Raccoon. Dang.

The woods got quiet – almost “Blair Witch Project”- like spooky – as I followed Leanne’s map. I was looking for a certain place where, she said, “That’s where I saw the creature.” If I were to encounter the creature, I wasn’t sure what I’d do. I had no weapon, or even Depends, so things could get difficult, fast.

But all I found were a few scattered Pepsi and Natural Light cans. I felt suddenly at ease. If The Springdale Pterodactyl lives there, we share the same dietary tastes. If I go back and find the bird, we’ll have plenty to chat about. – PJ Star