There is something very strange about Lonar Lake. The lake 400-foot wide perfectly round lake doesn’t fit local geology and scientists have discovered that strange magnetic forces are interfering with electrical equipment and sending compasses haywire. What is causing the electromagnetic anomaly?

What unusual secrets are hidden underwater? Could the lake’s weird magnetic properties be extraterrestrial in origin?

Lonar Lake is located four hours drive from from Aurangabad in the Buldhana district in the state of Maharashtra western India. It’s not visited by many tourists because many people are unaware of this beautiful and mysterious place. India’s Lonar Lake began causing confusion soon after it was identified in 1823 by a British officer named C.J.E. Alexander

The lake’s water is not normal and the lake itself appears to be completely misplaced. NASA scientists and Geological Survey of India officials have long wondered how Lonar Lake can exists and what’s wrong with it. Lonar Lake is approximately 150 meters (500 feet) deep, with an average diameter of almost 1,830 meters (6,000 feet). The perfectly circular lake shows evidence of higher magnetic readings than the surrounding area. 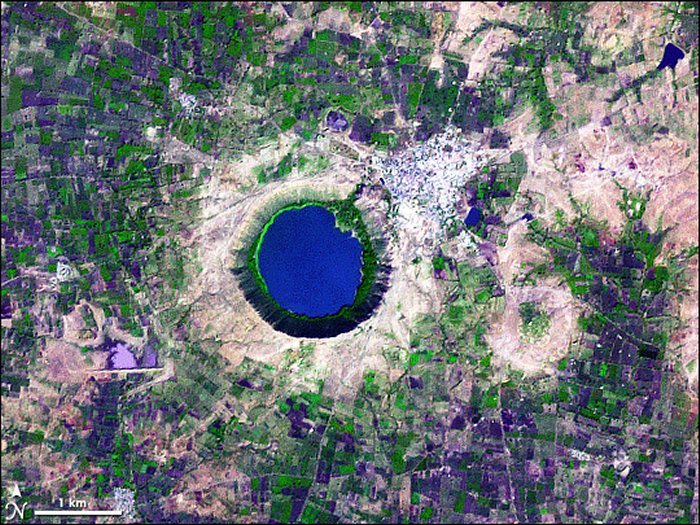 In November 2004, NASA’s Terra satellite acquired a great image of the mysterious lake. Scientists have long been puzzled by the strange electromagnetic disturbance in this area and have tried to find a cause.

Geologists suggested that the lake could in fact be a meteor impact crater. Objects that come from space are generally more electromagnetic than material that they strike on terrestrial Earth.

While examining the lake and water, local geologists found minerals and rock fragments that are formed when high-pressure, high-temperature metamorphism occurs. Scientists discovered unusual minerals like maskelynite, a kind of naturally occurring glass that is only formed by extremely high-velocity impacts.

So, there is enough scientific evidence to state that Lonar Lake was formed when a 2 million tons meteorite moving with a speed of 90,000 km/hr struck the Earth.

When the impact occurred is uncertain, but scientists estimate it could have been between 35,000 and 50,000 years ago.

It is the Earth’s largest and only hyper-velocity impact crater in basaltic rock and this beautiful Lake Lonar can be described as a little known astronomical marvel on Earth.