By Melissa Brinks for The Graveyard Shift

Fake psychics are almost as compelling as the real deal. Being a psychic, medium, or other afterlife mediator is rarely a lucrative career, but the flash-in-the-pan attention it can garner has drawn many aspiring supernatural superstars to the field. Fake mediums and other supernatural frauds have a long history in America and beyond, inspiring figures like Harry Houdini to dedicate their lives to exposing the hoaxes.

When it comes to supernatural phenomena, the burden of proof always falls on the person who claims that they can communicate with the dead or banish bad spirits. If you say that’s what you can do, then that’s what you’re expected to do – but these fake psychics and other charlatans instead prey on the fear and grief of others to make their tricks seem believable. Here are just a few of the trickiest psychic frauds who have been making the rounds.

Miss Cleo’s High-Cost Deceptions Were Discovered By The FBI

Miss Cleo was once a mainstay of the late-night infomercial circuit, promising that she’d reveal the future to callers using tarot cards and other psychic methods. In actuality, Miss Cleo was Youree Dell Harris, a woman from Los Angeles who joined the Psychic Readers Network in the late ’90s. The network was later fined for fraudulent claims and billing deception, and ultimately revealed to not even be filmed live – they were delivered from a script. Though Harris herself was not indicted, she was the face of a company with serious lapses in ethics, making her one of the most visible fake psychics in history.

The most common depiction of a medium often includes a group of people sitting around a table watching a crystal ball, waiting to hear rapping sounds indicating that someone is trying to communicate with the leader of the séance.

Those rapping sounds, however, can be directly traced back to the Fox sisters – Leah, Margaret, and Kate – whose antics shaped the future of American spiritualism. As religious movements were gaining strength, the sisters discovered that they could make rapping sounds by cracking their joints, which they used to convince others that they were communing with the dead. Eventually, Margaret and Kate confessed to their trick, though Margaret recanted her confession when she hit a period of poverty later in life.

Sylvia Browne was one of the best-known television psychics, especially for her work with police in finding missing people. Unfortunately, most of her predictions were revealed to be completely wrong – on more than one occasion, Browne said that missing people were dead when they were later found alive.

In one particular case, she told the mother of missing girl Amanda Berry that her daughter was dead. The mother died two years later – seven years before her daughter was found alive. In fact, according to the Committee for Skeptical Inquiry, of the cases with conclusive endings, none of Browne’s predictions were actually correct.

Uri Geller is one of the world’s most famous (or maybe infamous) psychics, best known for his apparent spoon-bending ability. However, during a 1973 appearance on The Tonight Show, the host coerced Geller into using objects he selected rather than Geller’s usual equipment. After spending some time contemplating the objects, he claimed that he wasn’t feeling strong enough to perform his feats and called it off. Carson, the host that evening, was familiar with stage magic and had set the situation up to prevent Geller from using sleight of hand or other trickery. When Geller declined to perform without his own spoons and other objects, it was a pretty clear signal that when he wasn’t in control Geller’s powers seemed to mysteriously vanish.

Harry Houdini, the famed American magician, began his investigation into the supernatural shortly after the death of his mother in the 1920s. Consumed with grief, he attended numerous séances in an attempt to contact his mother; however, with each one he attended he quickly discovered the tricks and sleight of hand being used by the self-proclaimed mediums.

From that point on, Houdini made it one of his life goals to discredit and debunk exploitative mediums. Then, in 1923, he encountered Mina Crandon – who was being considered by Scientific American magazine to be a true medium. To test her skills, Houdini developed a fraud-proof cabinet for her to perform with, and promptly discredited her when she failed.

Hollywood Medium‘s Tyler Henry gets by with his youthful good looks and odd habit of scribbling on paper to focus his psychic energy, but this modern-day medium is merely a skillful cold-reader and, most importantly, a Google-fanatic.

Though Henry claims to know nothing about the celebrities whose deceased loved ones he calls upon, almost every fact he reveals on the show can be easily searched for. And if it isn’t easily searched, the celebs in question often don’t know what he’s talking about. We have only Henry’s word to go on that he doesn’t use Google, and with his predictions always involving celebrities who are under significantly more public scrutiny than the average person, it’s hard to believe that he’s the real deal.

The cases surrounding Ed and Lorraine Warren – arguably the world’s most famous paranormal investigators – have inspired films like The Conjuring, Annabelle, and the entirety of the Amityville haunting story. But they’re also incredibly flimsy – apply the principle of Occam’s razor to any of their numerous cases and it becomes obvious that there are far more plausible explanations for the events than the presence of demons or hosts.

Even if the Warrens do have some truly supernatural cases under their belts, there’s still a whole lot about these stories that doesn’t add up. It’s far more likely that, in the process of dealing with some truly unexplainable events, they discovered there was profit and fame to be had, leading to a well-crafted image of being real-life ghostbusters.

Theresa Caputo gained fame as a medium for her down-home, earnest persona – listening to her speak, you really get the impression that she cares about you and your grief. But that’s a carefully cultivated image, and one that suits her quite well as she uses cold reading and vague statements to make her clients feel like she really is receiving messages from deceased loved ones.

Like many television mediums, Caputo relies on spectacle and intentionally vague statements to convince people that she’s actually conversing with their relatives. The combination of her personality and her ability to cold read is what makes her such a captivating figure. She clearly has a talent for reading people, though the purpose she puts it to is worthy of some side-eye.

James Van Praagh, another medium who claims to be able to connect people with their lost loved ones, is a frequent subject of examination for skeptics. The Committee for Skeptical Inquiry visited Van Praagh’s show in 2003, revealing not only that the medium was not psychic, but that he wasn’t particularly good at cold reading either. His heavily edited show makes it seem as though he has a lot of hits with his psychic reading ability, but the investigation revealed that he actually spends far more time floundering than he does telling people what they want to hear.

Most fans of ghost hunting shows know that there’s at least some trickery at work, but Most Haunted took that to a whole new level. Investigators fed Derek Acorah, a medium on the show, the fake name Kreed Kafer – an anagram for ‘Derek Faker’ – and Acorah claimed to become possessed by the spirit. Acorah then claimed that he’d spoken to another fictitious spirit, worked in some false history based on the intentionally bad information he received, and communicated with spirits from an asylum while actually just being in an average home. Though he has been caught lying on television repeatedly, Acorah continues to claim that he is a genuine medium.

Rosemary Altea, like many television mediums, makes her living by contacting the dead for bereaved families. But unlike most television mediums, she was exposed on Penn and Teller’s Bullsh*t, where tapes and interviews revealed that she wasn’t even cold reading the audience – she’d asked the audience questions beforehand or been fed information by her literary agent. Knowing this, her conversations with grief-stricken parents and family members feel pretty ghoulish. One writer believes that Altea is not intentionally deceiving people, but rather that she learned how to read people by accident and merely uses the skill for personal gain. 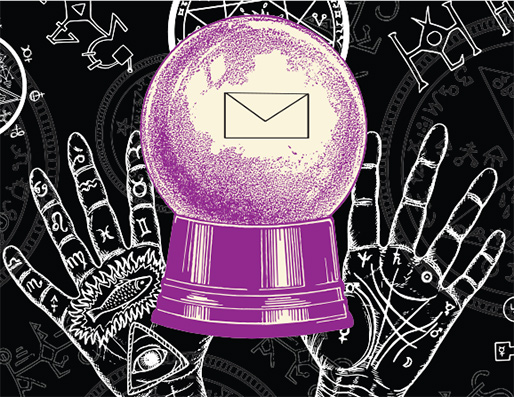