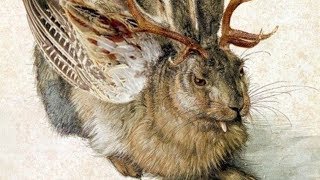 (VIDEO BELOW) The jackalope, just like its hairy cousin Bigfoot, has become something of an American institution. Your local farmer might claim to have spotted jackalopes in his fields from time to time. Your classmate probably warned you that jackalopes are vicious if provoked. Here’s the truth about jackalopes.  Believe it or not, the widespread belief in hares with horns goes back to the days before the USA was the USA. The first known document showing something like a jackalope is a Persian geographic dictionary from the 1200s depicted a rabbit with a single, unicorn-esque spike on its head. The the rather fearsome, fanged Bavarian “Wolpertinger” painting dates to 1509, and in later centuries, horned rabbits began appearing in all sorts of European tomes. And then there’s the legends from Central America. According to People of the Peyote: Huichol Indian History, Religion, and Survival, one of the iconic heroes of ancient Huichol culture was Kauyumari, a deity sometimes called the Blue Deer, who was said to have first received his antlers as a gift from his friend, the rabbit. Those are legends, but for centuries people believed horned rabbits were real. They even had a scientific name: Lepus cornutus. In 1673, for instance, legendary British naturalist John Ray described seeing both “the head of a horned hare” and also “the horns of a hare” among an assortment of other, regular animal body part specimens. By the end of the 1700’s, though, scientists had decided that jackalopes weren’t, in fact real. Watch the video for more about The Truth Behind Tha Jackalope, The World’s Scariest Rabbit!