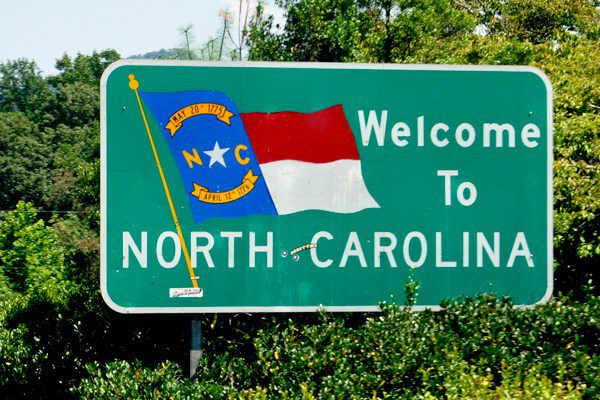 From a banshee-plagued river to a mountain with mysterious lights, North Carolina is full of haunted places. Here are seven of the most frightening.

According to local legend, a tragic figure known as the Lady in Pink haunts Asheville’s Grove Park Inn. Like many hotel ghosts, the Lady in Pink reportedly fell to her death from an upper-level room. In this case, room 545. Some versions of the tale claim she jumped after a love affair gone wrong (like the female spirits here and here). Others say the Lady in Pink slipped by mistake. Either way, the playful spirit is said to roam the historic inn dressed in a beautiful pink ballgown. Legend has it she’s fond of whispering to children, tickling guests’ feet as they sleep, and switching off electrical devices, among other things.

For generations, mysterious balls of light have appeared over Brown Mountain in Burke County, North Carolina. The phenomenon is so common that a local sign reads: “From early times people have observed weird, wavering lights rise above this mountain, then dwindle and fade away.” Are the lights paranormal? It depends on who you ask.

According to one Cherokee legend, the Brown Mountain Lights are the spirits of women searching for fallen warriors. Modern theories attribute the illumination to distant cars or trains. Others say ball lightning, swamp gas, or even UFOs are to blame.

The devil himself reportedly haunts a bare patch of earth in Chatham County. According to local lore, the prince of darkness ascends from hell and walks in circles, plotting death and destruction for mankind. Though the devil doesn’t reveal himself, the spot has been forever cursed by his foul presence. Eerie activity includes objects that disappear, shadows that slink through trees, and soothing voices that lure visitors into the woods.

Built in 1800, the Latta Plantation was once home to a prosperous merchant and his family. Today, it is a 52-acre living history museum. Legend has it the historical site is also home to a few ghosts. Some visitors and reenactors have seen shadow people on the property, while others have heard children playing in the upper level. Other activity includes doors that slam shut on their own, a heavy mirror that crashes to the floor without breaking, and disembodied whispers.

According to local legend, a banshee haunts Tar River near the small town of Tarboro. During the Revolutionary War, a group of British soldiers allegedly killed a patriot who swore a banshee would haunt them after his death. The soldiers laughed and drowned the man in the river, but sure enough a banshee visited each of the men just days later. Now, the banshee appears to those who wade in the same area of the river at night.

The legend of Gimghoul Castle at the University of North Carolina goes something like this. In the 1800s, two young men were in love with the same woman. They agreed to a duel, and one of the men, Peter Dromgoole, was killed and buried under a rock that now bears his name. The woman at the center of the love triangle soon died of heartbreak, and the two lovebirds now haunt the castle.

Legend has it a beautiful Cherokee woman hurled herself off a cliff after her husband was murdered. The woman, Mist-on-the-Mountain, and her husband, Magwa, now haunt the ledge known as Lovers Leap. Though contemporary accounts of the haunting are rare, the doomed couple is reportedly most active “when the June moon rises, and the flooded river laps at the base of the rock.” Eerie activity includes disembodied screams, howls, and odd splashes in the river below. Lovers Leap is along the Appalachian Trail, and countless hikers trek past it each year. How many unknowingly encountered the spirits of the doomed lovers?