A Woman in Somalia Supposedly Gave Birth to a Live Snake 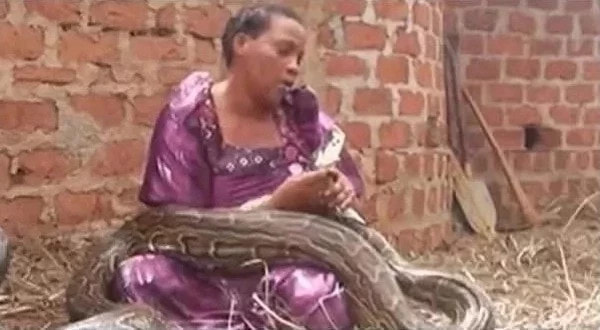 A Somali woman has supposedly given birth to a snake. The woman, from the Afgooye district of Mogadishu, was – understandably – said to have been quite shocked after giving birth to the legless reptile, because she was expecting two human twins. Luckily, the snake did not attack her as it left the womb; it was reportedly non-violent, like her new human son.

Family Relative Ali Muhammad, who lives in the village outside the capital, told me: “Today I went to visit a new mother who just gave birth to twins. A boy and a snake. I saw the boy first. As soon as I came in the house, the mother said that it was hiding. Whenever the snake sees its father and mother he stays with them and sits near the baby. If anyone else comes in the room it runs away and hides under the bed or cupboards.”

The father and mother both believe that the snake child is a miracle, a gift bestowed to them by God. And apparently humans giving birth to animals isn’t as rare or physically impossible as you’d think. Most documented reports of such incidents began to emerge in the early 17th century. In 1636, for instance, an Italian physician named Paolo Zacchia received a letter from fellow physician Pietro Castelli, claiming two women had given birth to two creatures. He stated that one birthed a monster and one a cyclops. Castelli also later claimed that a woman had given birth to a dog-like creature in Sicily, Italy.

The UK’s earliest equivalent was a one Mary Toft. Kind of. She claimed to have given birth to rabbits in the 18th century, got the whole town to believe her, then admitted that her claims were total bullshit – an embarrassing admission for the doctors who were helping her to make her case.

More recently, a woman in Indonesia supposedly gave birth to a lizard. She had all the warning signs of being pregnant with a real homosapien baby, but instead of birthing one of those she pushed out a lizard. It was covered in blood and mucus. No baby was found in the womb.

Helpfully, doctors explained that what was going on there was something called “pseudocyesis” – a false pregnancy, when a woman’s body mimics that of an actually pregnant person. So, the thinking goes, the woman must have believed she was giving birth when a lizard crawled underneath her, got itself covered in various bodily fluids and emerged the other side.

However, ask the church about these apparent freak births and you might get a different explanation. Dr Michael Masadi, a pastor from the New Testament Gospel Church, told me, “If you look at the Bible, in Genesis we were told that the angels – falling angels – slept with women. They posed as men and produced giants: phenomenal, abnormal, extraordinary human beings. It’s a very broad area. A miracle is the intervention of the supernatural, or the divine, or the natural. It is a work of God, which sometimes we cannot really explain.”

The pastor added: “Sometimes, when we are not able to explain some phenomenon, we regard it to be a miracle. What I’m concerned about is someone giving birth to a creature that’s not a human being, and calling that a miracle. We must not forget that the world isn’t as God had intended it to become. There have been a lot of distortions since the fall of the garden of Eden, so the phenomenons we experience now are the outcome of what happened on that historical day.

“I, for one, wouldn’t call [the snake birth] a miracle – for me, a miracle is God doing something. This is the supernatural. It is the outcome of the falling of man. The fall of man affected the whole creation. That is the first thing I would say. The second thing I would say is that this is the work of demonic activities. That the animal slept with the woman. So generally I would put it down to demons.”

Of course, scientifically it’s not possible for a human to have sex with an animal and give birth to a hybrid creature, not matter how many demons are involved. Genetics just don’t work like that. The most rational explanation for the majority of cases is that the child in question was born with severe deformations and somehow mistaken for a snake, or a dog, or a rabbit.

However, depending on who you believe, we may only be a matter of years away from human women being able to carry shark foetuses. So perhaps the snake baby isn’t so far-fetched after all.

(Photo by John Tann via)