A newborn baby who was kidnapped from a Chicago hospital in 1964 has been found living in rural Michigan 55 years later.

Chester and Dora Fronczak’s one-day-old baby Paul was abducted from Michael Reese Hospital on April 26, 1964. A woman dressed as a nurse took the child from his mother’s room saying she was bringing him to see a doctor but then never returned.

For the next two years, the FBI and local law enforcement conducted a desperate search for the child. The case was finally closed in 1966 when authorities were notified about a two-year-old boy abandoned in a New Jersey shopping center who resembled the missing child.

The Fronczaks’ were reunited with the boy they believed was their son, though his identity could not be confirmed because it was decades before the invention of DNA testing.

Paul Fronczak was 10-years-old when he learned that he had been abducted as a child. Nearly four decades later in 2012, he took a DNA test which proved that he was not related to Chester and Dora, reigniting the mystery surrounding what had happened to the couple’s biological son.

Investigative journalists with WGN set out to find the real Paul Fronczak. On Wednesday the outlet revealed that they’d tracked him down in a small town in Michigan, where he is living under a different name. 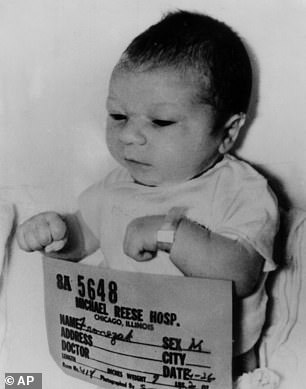 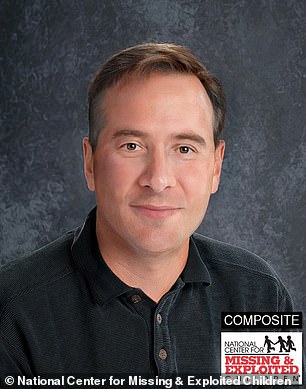 This age-progression image, (right), shows what Paul Fronczak, who was abducted from a Chicago hospital in 1964, (left), could look like today. 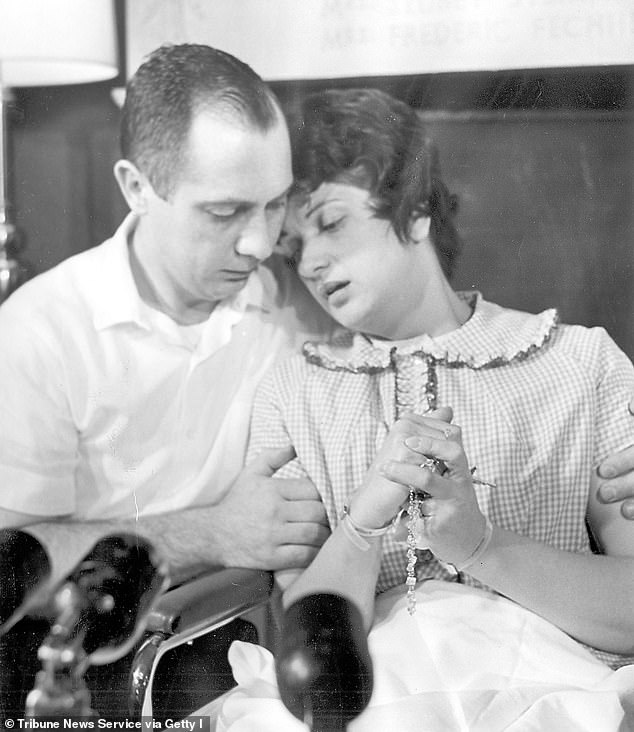 Chester and Dora Fronczak’s one-day-old baby Paul was abducted from Michael Reese Hospital on April 26, 1964. A woman dressed as a nurse took the child from his mother’s room saying she was bringing him to see a doctor but then never returned. Two years later, the parents (pictured) were reunited with a child investigators believed was their biological son 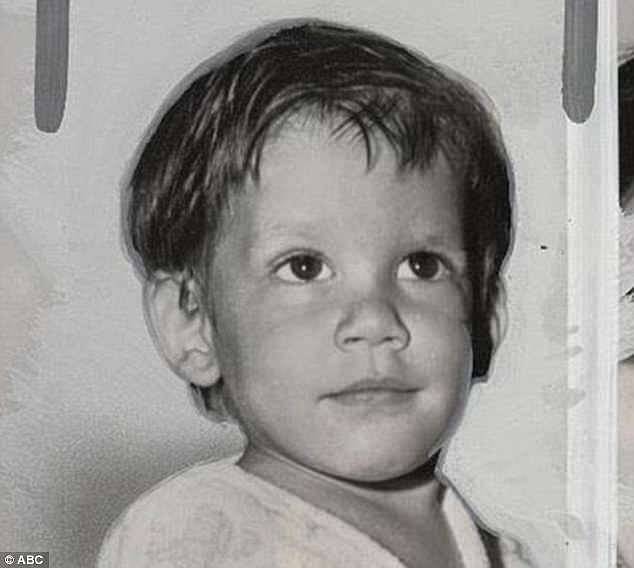 The child mistakenly believed to be the real Paul Fronczak was found abandoned in a New Jersey shopping center in 1966. He is pictured after being returned to Chester and Dora

The man, whose name was withheld by WGN because he is a crime victim, said he was aware of the evidence proving he is the same child abducted from the Chicago hospital over half a century ago.

He said he learned his true identity when the FBI contacted him a few months ago, and he is still coming to terms with the news.

The man would not say whether he planned to connect with his biological mother, Dora. He will never get the opportunity to meet his father, Chester, who died several years ago.

FBI Chicago spokesperson Siobhan Johnson declined to comment when asked by WGN whether the bureau has confirmed whether the man in Michigan is Paul Fronczak.

‘Several years ago, the FBI reopened the investigation into the disappearance of Paul Joseph Fronczak,’ Johnson said in a statement.

‘Our investigation into this matter remains ongoing as we continue to pursue all leads.

‘We ask for privacy for the victims as we continue to investigate the facts surrounding this case.’

Dora, who lives in Chicago’s suburbs, also declined to comment.

The 1964 abduction made nationwide headlines at the time (pictured) and 40 years later, when the man Chester and Dora Fronczak raised believing he was their abducted son took a DNA test and learned he was not related to the couple 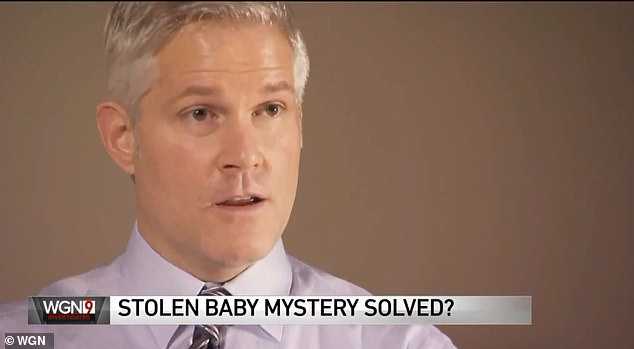 The misidentified Paul Fronczak is pictured in 2013 one year after he learned that he was not biologically related to the parents who raised him. He later learned that he’d been given the name Jack Rosenthal at birth

The other child embroiled in the abduction ordeal, the Paul Fronczak raised by Dora and Chester, opened up about his quest to find his real identity in an interview last year.

Paul, now a 55-year-old father-of-one, told The Sun that he had harbored doubts that Dora and Chester were his biological parents for years after learning about the abduction when he was 10.

He approached his parents about his suspicions in 2012, and they agreed to use an over-the-counter DNA testing kit to determine the truth about his identity.

Dora and Chester later changed their mind and asked Paul not to send the kit off, but he sent it anyway, soon learning that there was no way he was related to the couple.

Paul said his parents stopped talking to him for a year because he ignored their wishes.

Curious about who his biological parents were, Paul hired a genetic genealogist Cece Moore to track them down. In 2015, he learned that his given name at birth was Jack Rosenthal.

Paul said he reached out to the Rosenthal family and learned some dark secrets about his biological parents.

Paul said family members told him that he had a twin sister, named Jill, who went missing after allegedly being neglected by his biological parents. The Rosenthal family never learned what happened to Jill, and she remains missing.

Paul said one cousin told him that his biological parents would keep him and Jill ‘in a cage’ when they were babies. Other family members told Paul that he and his sister were constantly crying.

Paul still doesn’t know how he ended up alone at a shopping center, but believes something ‘tragic’ happened to Jill and his biological parents abandoned him to try and cover it up.

‘I had expected to feel absolute elation when I finally learned my true identity,’ he said. ‘But that’s not what happened, because in the very next breath I learned that I also had a twin sister who was missing.’

He added: ‘The only reason I started this journey was to find my parents’ kidnapped son, Paul. If I found out who I was in the process, that was a bonus. I never imagined that this mystery would only get bigger as we found more answers.’

After finally figuring out his own identity, Paul began digging into the child he was mistaken for – the real Paul Fronczak.

During the 2018 interview he said the strongest lead he had involved someone who had passed away in Texas many years ago.

‘We also have new leads that come in every week, and we’re just going to keep tracking them down until we find the real Paul,’ he told The Sun. 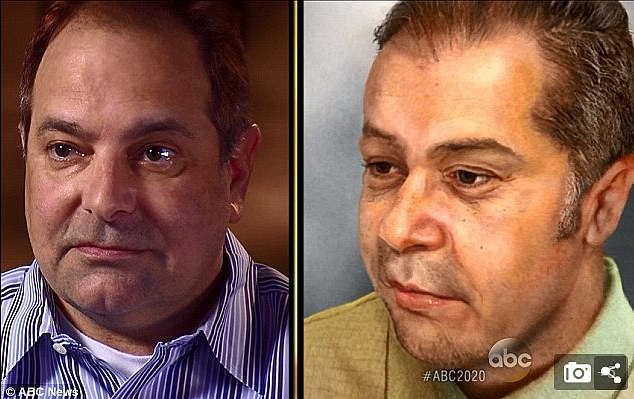 In 2014, a man named Sam Miller (left) came forward and suggested that he could be the real Paul Fronczak after seeing an age-progression image (right) of the missing boy that had a shocking resemblance to himself. However, adoption papers revealed Miller was not Paul

In 2014, a man named Sam Miller came forward and suggested that he could be the real Paul Fronczak after seeing an age-progression image of the missing boy that bore a shocking resemblance to himself.

Miller grew up in a suburb outside Chicago but did not learn he was adopted until earlier this year after doctors told him his kidney disease, which he has battled for years, had taken a serious turn for the worse.

He called a cousin for information about the family’s medical history.

The cousin told him he was adopted and that there was no such history of kidney disease in their family.

Miller, who is married with two children, has end-stage renal disease and finding his real family has become a life-threatening issue.

‘So here I am. And I hope that I’m able to find a kidney, find my family and go on with my life,’ Miller told ABC News.

‘Because I’m kind of near the end.’

Unfortunately, original adoption papers obtained from a government office in Chicago proved that Miller was not Paul Fronczak. 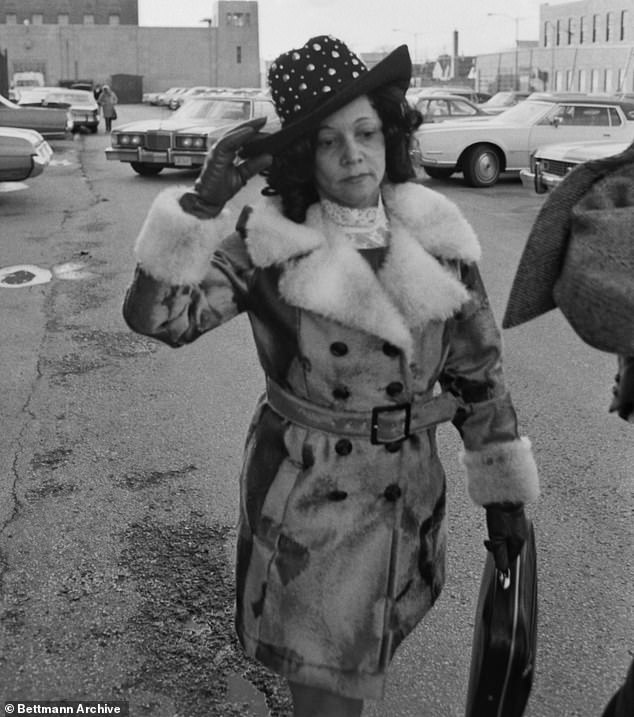 The 2013 revelation that the real Paul Fronczak was still missing also renewed speculation over the woman responsible for the abduction. The following year, a 64-year-old Chicago resident named Johnnie Harbaugh came forward and suggested that his mother, notorious 1970s welfare fraudster Linda Taylor (pictured), may have been the kidnapper

The 2013 revelation that the real Paul Fronczak was still missing also renewed speculation over the woman responsible for the abduction.

After ABC News aired a 20/20 investigative special on the case, a 64-year-old Chicago resident named Johnnie Harbaugh contacted the outlet and suggested that his mother, Linda Taylor, may have been responsible.

Taylor became one of the most reviled figures of the 1970s after President Ronald Reagan dubbed her ‘America’s welfare queen’ during a speech. The fraudster was accused of committing countless crimes against the welfare system using 100 aliases and 50 fake addresses.

‘My mother was capable of anything. Not only stealing a baby, but she could steal you,’ Harbaugh told ABC of Taylor.

‘She was just that kind of woman. You know, she done whatever it took for her to survive.’

After being shown a photo of the one-day-old Paul Fronczak, Harbaugh claimed that he saw the baby for the first time when his mother brought him to their house one day in 1964.

Harbaugh recalled that he used to play with the infant, who got the nickname ‘Tiger’.

Taylor, who died 12 years ago from a heart attack, was known as a master of disguise. Born Martha Miller or Martha Louise White, the brunette woman with a slightly dark complexion could pass off as Caucasian, Jewish, African-American, Asian or Puerto Rican.

Although Reagan used Taylor’s example to illustrate the abuses of the welfare system in the United State, it is generally believed that the scope of her criminal activity was much broader, encompassing assault, theft, bigamy, and possibly even murder.

According to her son, the woman often described as a ‘chameleon’ had a room in their home dedicated entirely to her wigs and disguises, including nurse and doctor outfits.

In 1977, Taylor’s schemes and lies had finally caught up with her when she was found guilty of multiple counts of welfare fraud and sentenced to two to six years for claiming public assistance, Social Security and veteran’s benefits by using fake identities.

It was during the trial that she first became a suspect in the abduction of Paul Fronczak.

According to a newspaper report, one of Taylor’s ex-husbands said that she showed up one day in the early 60s with a newborn baby boy.

Taylor never admitted to the kidnapping and never faced charges in connection to the Fronczak case.

Speaking to ABC, Taylor’s son said that he came home from school one day and found that the infant dubbed ‘Tiger’ was gone. His mother offered him no explanation regarding his whereabouts.

Looking back on the ordeal, Harbaugh said his mother most likely handed baby Paul to one of her boyfriends from Tennessee.