The dream of time travel has been with humans for a long time. We encounter time travel machines in science fiction books and movies. Scientists keep debating whether time travel is possible at all, and there are even those who claim to have traveled through time, though there is no solid evidence of such remarkable journeys.

Ron Mallett is an astrophysicist who is convinced time travel is possible and he says he has come up with scientific equations and principles that can lead to the production of a time machine. It does sound fantastic, and even unbelievable to most but Mallett’s pursuit of time travel dates back to early years when he was just a small child and his father died suddenly, of a heart attack.

“Mallett’s father, a TV repair man, instilled in his son a love of reading, and encouraged his budding passion for science. About a year after his father’s death, a grieving Mallett stumbled across an illustrated version of the classic sci-fi novel “The Time Machine.”

“The book that changed my life,” he told CNN Travel.

Thanks to the imagination of author H.G. Wells, suddenly Mallett felt his family tragedy presented not an end, but a beginning.

Sixty years later, 74-year-old Mallett is a professor of physics at the University of Connecticut. He’s spent his career investigating black holes and general relativity-  the theories of space, time and gravity famously explored by Albert Einstein.

Mallet has theorizing about time travel for many years and spent time thinking about how he could build a machine that allowed him to visit the past.

He has read science books about time travel and he is still a long away from achieving his dream. Even though he is a recognized professor in his field, many people and fellow colleagues do wonder whether his ideas are plausible.

According to CNN, “Mallett points to the 1968 sci-fi classic movie “Planet of the Apes,” at the end of which [spoiler alert] an astronaut realizes that he hasn’t traveled to a distant, ape-ruled planet, but merely returned to Earth in a post-apocalyptic future in which mankind has been subjugated by simians.

However, this is all about going forward not backward, so how would this help Mallett’s quest to be reunited with his father? 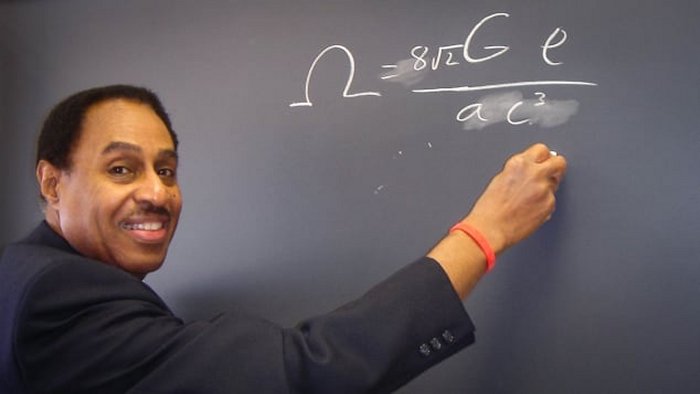 Ron Mallett with his key equation, which he says proves time travel is possible. Credit: CNN

Einstein’s general theory of relativity is based in the concept of gravity — and considers how time is affected by gravity.

“What Einstein meant by that is the stronger gravity is, the more time will slow down,” says Mallett.

Einstein’s general theory of relativity says that what we call the force of gravity isn’t a force at all, it’s actually the bending of space by a massive object.

“If you can bend space, there’s a possibility of you twisting space,” says Mallett.

“In Einstein’s theory, what we call space also involves time — that’s why it’s called space time, whatever it is you do to space also happens to time.”

Mallett posits that by twisting time into a loop, one could travel from the future back to the past — and then back to the future. And this is the idea of a wormhole, a sort of tunnel with two openings.

Mallett suggests that light could also be used to affect time via something called a ring laser.

He’s created a prototype illustrating how lasers could be used to create a circulating beam of light that twists space and time — inspired by his first job experimenting with lasers’ effect on airplane jet engines.

“It turned out my understanding about lasers eventually helped me in my breakthrough with understanding how I might be able to find a whole new way for the basis of a time machine,” says Mallett.

“By studying the type of gravitational field that was produced by a ring laser, this could lead to a new way of looking at the possibility of a time machine based on a circulating beam of light.”

Mallett’s also got a theoretical equation that, he argues, proves this would work.

“Eventually a circulating beam of laser lights could act as a sort of a time machine and cause a twisting of time that would allow you to go back into the past,” he says.

There’s a snag though — a pretty big one.

“You can send information back, but you can only send it back to the point at which you turn the machine on,” says Mallett.

While his quest to go back to the 1950s isn’t anywhere closer to a reality, he remains optimistic, and continues to ponder possibilities.”

In the meantime, it worth mentioning that are scientists who say that time travel is possible through entangled wormholes but we cannot return from the past to the present.

Does time travel only offer a one-way ticket?