(by Alicia McDermott for Ancient Origins)

Global, myth, folklore, and legends provided inspiration for the vast array of vivid creatures and fantastical elements that fill the pages and the silver screen of the enthralling, magical world of the Harry Potter franchise. For many, the Harry Potter stories may have been their first peek at creatures from ancient myth – albeit with a modern twist.

Rowling is adept at combining elements from some of the world’s oldest and greatest legends – tales of heroic journeys, tests of courage and strength, good vs. evil, friendship, love, pain and heartache, all rolled up in an enchanting world where nature and magic blend. The familiarity with these aspects make the running themes identifiable, but they are given a fresh coat of paint.

Some of the more famous creatures from classical myth which appear in the story include: unicorns, mer-people, dragons, a sphinx, ghosts, elves, witches, wizards, and giants – this is a magical world after all. But there are also some lesser-known beings which show up, and others which played such a role that it is worth noting how they were adapted from ancient tales into a more modern wizarding world.

Veelas may be one of the less common beings to appear in the story, for Western readers at least. But these beautiful yet sometimes dangerous female creatures are prevalent in Slavic folklore. Called Wila, Vila, or Vili, they are often described as fair-haired spirits trapped between the world of the living and the dead. They are said to be similar to woodland fairies or nymphs, however stories generally say they were not born magical beings but became so because they died unbaptized or single.

As in the Harry Potter adaptation, where they show up to support the Bulgarian Quidditch World Cup team in Goblet of Fire , the female beings may appear enchanting at first glance, but they can drastically change to reveal their true, far more frightening nature if they are angered. The mythological Wilas could go so far as to kill if they were infuriated. 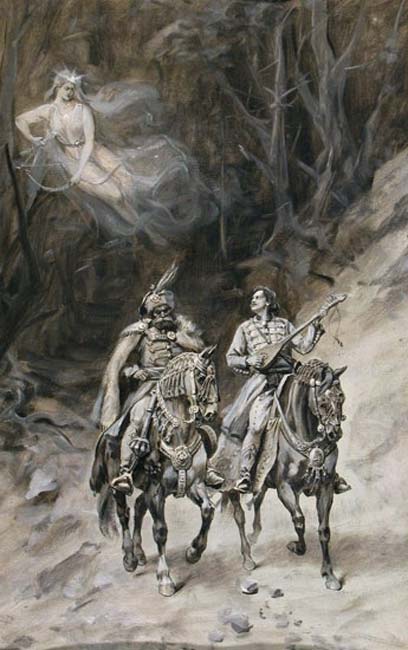 Serbian epic heroes Prince Marko and Miloš Obilić, and the vila Ravijojla in the painting ‘Miloš, Marko i vila by Paja Jovanović.’ It is inspired by the poem “Marko Kraljević and the Vila.” ( Public Domain )

In the Harry Potter stories, Nagini is Voldemort’s pet snake and a living Horcrux. It accompanies the villain almost constantly until he regains his body in the Goblet of Fire. In reality, both Buddhism and Hinduism have semi-divine serpents which are large snakes or half-human/half-snake. The creatures are called Naga (male form) or Nagi (female form).

In the ancient symbolism, a snake is often linked to death, and rebirth because of its shedding of its skin. Legends say the Nagas have magical powers and live in an underground city. There is also a popular story of a Naga using its multiple heads to protect the Buddha from a storm. 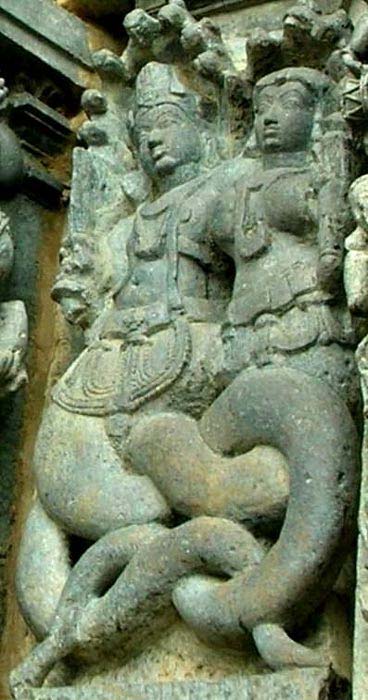 Hoysala sculpture of a naga couple in Halebidu. ( Public Domain )

Fawkes the Phoenix/Egyptian Bird of the Sun

In the fictional world of Harry Potter, Fawkes is the intelligent, loyal phoenix which accompanied the famed wizard Dumbledore and sometimes helped Harry. The bird’s name is a reference to the gunpowder plot conspirator Guy Fawkes, a man whose effigy is ritually burned every year on top of huge bonfires. Fawkes gave his tail feathers to the wandmaker Mr. Ollivander to create the core of two of the most important wizarding wands – Voldemort’s and Harry’s.

The red and gold coloring of Fawkes coincides with a story Herodotus mentions in his 5th century BC Histories of a phoenix he was told lived in Egypt. Herodotus does admit that he never saw the magnificent bird himself, only an image of one. The Roman historian Tacitus also made a note of tales of a phoenix living in Egypt in the 1st Century AD. His writing on the mythological bird states that the creature supposedly lives for about 500 years and it is a sacred bird of the sun. Fawkes differs from the original mythological creature by being reborn from his ashes every few weeks. Neither of the ancient historians make note of a phoenix being reborn after going up in flame, though there is reference to a young phoenix burying its parent bird. 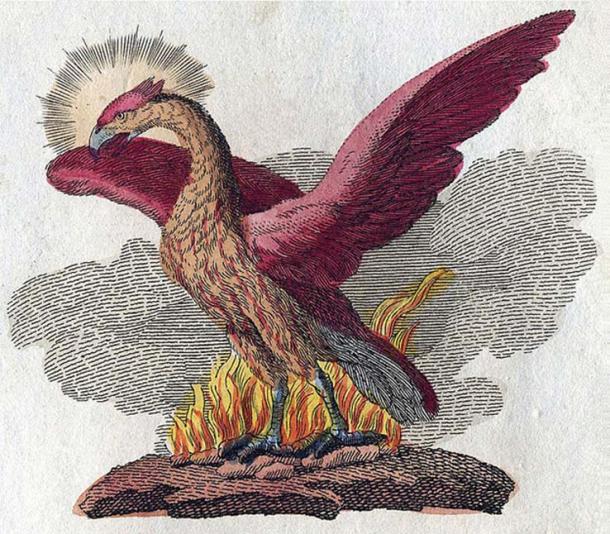 How Did the Hell Hound Cerberus Become Fluffy? That’s Something of a Harry Potter Hogwarts Mystery

Fluffy, the three-headed beast that Dumbledore had guard the trapdoor (thus access to the Philosopher’s stone) at Hogwarts, was apparently bought from a ‘Greek Chappie’ Hagrid met at the pub. The film attributes the previous owner as Irish instead, but the book version provides a clear nod to the origins of this character – Cerberus.

Cerberus was appointed, like Fluffy, to guard an entrance. In this case, the myth had the monstrous three-headed creature guarding the underworld by order of Hades. Most of the old sources agree on this number of heads, though some, such as Hesiod claimed it had up to 50! The number three apparently represented the past, present, and future, or birth, youth, and old age.

If a monstrous multiple-headed dog was not scary enough, some variations on Cerberus’ appearance include the mythical beast having a serpent’s tail, a mane of snakes, and the claws of a lion. It had a poisonous bite and razor sharp teeth too. Both Cerberus and Fluffy have been attributed with a weakness for music. In the Greek myth, Orpheus used his lyre to lull the beast to sleep and Fluffy of Hogwarts was sent off to dreamland by a magical harp and the tune of a flute. 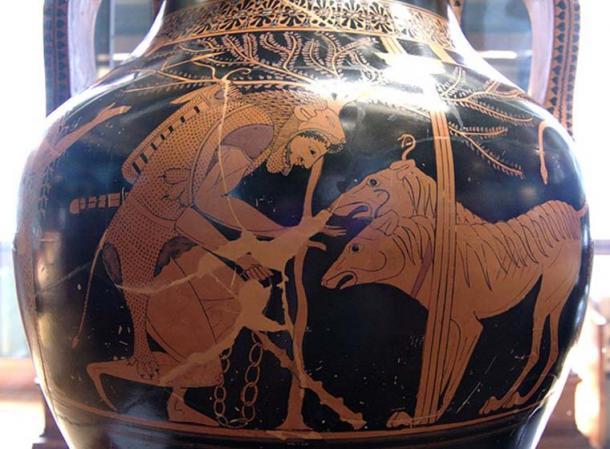 Heracles, chain in left hand, his club laid aside, calms a two-headed Cerberus, which has a snake protruding from each of his heads, a mane down his necks and back, and a snake tail. ( Public Domain )

The Continuity of Centaurs: Firenze/Chiron

The Centaur Firenze and his companions in the Forbidden Forest are another direct link between the Harry Potter stories and the mythical beings of ancient Greece. Both the centaurs of old and the modern adaptations are shown as human-horse hybrids preferring to live in the forests.

They combine some elements of man and beast. In the novels, the centaurs are generally depicted as noble and having a strong interest in astrology and archery. They also contain some of the traits of their forefathers from the region of Magnesia and Mount Pelion in Thessaly, when they present more wild and barbarous aspects of their personality. Firenze, who eventually takes a teaching position at Hogwarts, has been likened to the intelligent astrologically-inclined centaur of Greek myth, Chiron – teacher of Achilles, Theseus and some other Greek heroes. 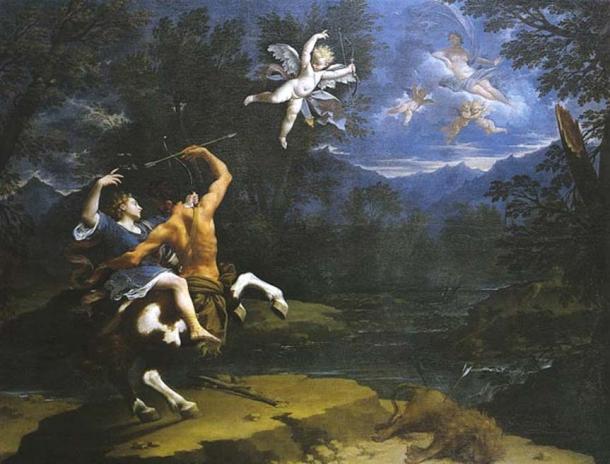 You wouldn’t want to meet a basilisk, no matter if it was the fictional beast inhabiting the Chamber of Secrets, or the king serpent from classical myth. Both have been generally described as giant, deadly, venomous snakes, though Pliny’s version in the “ Naturalis Historia,” was deadly, but not exactly large.

Continuing with the bigger version of the more mythological snake, the monster was said to have the ability to break stones and create deserts with its breath, set bushes on fire, and kill its victims with its gaze. Pliny claimed that its poison could apparently even seep up a spear to kill you. Lucky for Harry Potter, Rowling’s version of  Salazar Slytherin’s Basilisk didn’t have the same type of poison, he killed it with Godric Gryffindor’s Sword.

For another variation to the myth seen at Hogwarts, Hermione and Colin ended up as petrification patients by looking the basilisk indirectly in the eye. Moaning Myrtle is a known victim of the basilisk because she met its gaze straight on. Harry Potter was only saved from the poisonous venom of the basilisk when it bit him by Fawkes’ phoenix tears.

Both the ancient basilisk and the modern adaptation have been declared to have a weakness – a rooster’s crow. Classical tales of the basilisk also name weasels as means to kill the beast. If you could trap it in a weasel’s den or throw a weasel into the basilisk’s den it could be defeated. A basilisk could also be killed by meeting its own gaze in a mirror. 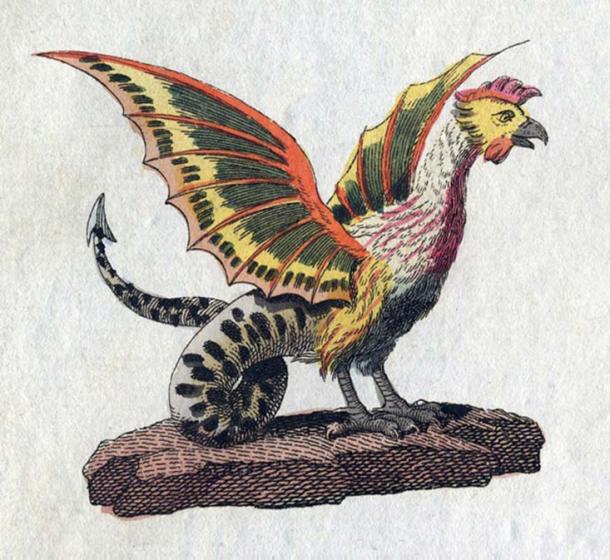 One variation of the basilisk’s appearance includes the head, wings, and legs of a rooster. ( Public Domain )

It is no surprise that J.K. Rowling drew inspiration from ancient myths and legends. They are ‘classics’ for a reason, stories of these kinds of creatures have been passed down due in large part to their timeless appeal. It is worth mentioning as well that Rowling is a Classics major, so she has a wealth of knowledge to draw inspiration from. Rowling has joked , “I’m one of the very few who has ever found a practical application for their classics degree.

And she had no qualms with mixing some of the famous, noble creatures, like centaurs, into her wizarding world with its thrilling sport of Quidditch, wizarding duels, and toilet-haunting ghosts. As Rowling herself said:

“I’ve taken horrible liberties with folklore and mythology, but I’m quite unashamed about that, because British folklore and British mythology is a totally bastard mythology. You know, we’ve been invaded by people, we’ve appropriated their gods, we’ve taken their mythical creatures, and we’ve soldered them all together to make, what I would say, is one of the richest folklores in the world, because it’s so varied. So I feel no compunction about borrowing from that freely, but adding a few things of my own.”

They’re so exciting, it is likely that some of the ancient creatures will make another appearance in the new Harry Potter Hogwarts Mystery game too.

Alicia McDermott has degrees in Anthropology, International Development Studies, and Psychology. She is a Canadian who resides in Ecuador. Traveling throughout Bolivia and Peru, as well as all-over Ecuador, Alicia has increased her knowledge of Pre-Colombian sites as well as learning more about modern Andean cultures and fine-tuning her Spanish skills. She has worked in various fields such as education, tourism, and anthropology. Ever since she was a child Alicia has had a passion for writing and she has written various essays about Latin American social issues and archaeological sites. Her hobbies include hatha yoga, crocheting, baking, reading and writing.