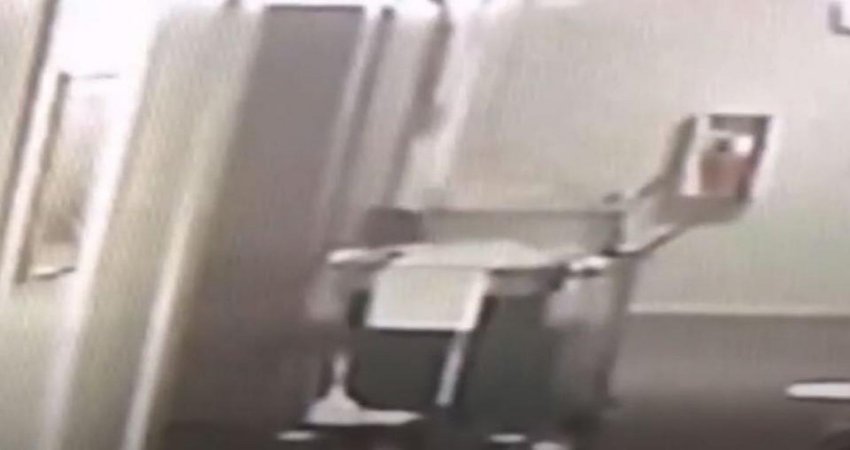 Spooky Shadow Figure Passing Through Wall Caught On Camera – An Interdimensional Being?

If we assume the Parallel Universe theory is valid then there are several invisible worlds surrounding our own reality.
If this is true, then it can happen we occasionally catch brief glimpses of unknown beings or places that co-exist next to our reality. Recently, a strange incident has been caught on camera in the Eagle’s Nest hotel in Quincy, Illinois. Are we seeing an interdimensional being, a ghost, a prankster or is it a camera glitch? It doesn’t look like the appearance is a result of a camera malfunction.

Eagle’s Nest employee Jennifer Majors posted this video on Facebook, and if you take a look you’ll find something unusual was caught by a CCTV camera at the hotel. It should be added the employees have long believed something spooky is lurking in and around the hotel.
According to The Hidden Underbelly 2.0, who uploaded the video to YouTube, the doorway through which the ultrafast shadowy figure appears is actually the opening for the elevator.
“When the elevator doors are open, the lights come on, so as you can see there were no lights coming on. That door is shut so this shadow figure just came out of nowhere,” says the narrator of the video says.
We also learn that this sighting of the unknown figure was accidentally made at that exact moment because “some things had come up missing off the housekeeper’s cart and so she ran the cameras back.”
“The history behind this is employees have reported seeing a small shadow out of the corner of their eyes and hearing giggling,” he explains in the video.
“Which leads me to believe that what we are looking at is the spirit or a dark spirit of a child or something pretending to be a child.
We can agree on the fact that we’re seeing a dark shadow figure moving in and out of the hallway pretty fast, but who is this person and where did he come from?
Written by Cynthia McKanzie – MessageToEagle.com, Staff Writer