Don Wood – MessageToEagle.com – How much did ancient thinkers know about the structure of our planet? Plato seems to have been onto something, researchers have found. Many ancient theories have been confirmed by modern scientists, and this time, researchers demonstrate Plato’s theory the Earth is made of cubes is not far-fetched at all.

How could he know this without access to proper technology? Scientists suggest Plato figured it out because was very sensitive to geometry. “His intuitions, backed by his broad thinking about science, may have led him to this idea about cubes,” researchers say.

Plato, the Greek philosopher who lived in the 5th century B.C.E., believed that the universe was made of five types of matter: earth, air, fire, water, and cosmos. Each was described with a particular geometry, a platonic shape. For earth, that shape was the cube.

Science has steadily moved beyond Plato’s conjectures, looking instead to the atom as the building block of the universe, but maybe we shouldn’t be ignoring the ancient philosopher’s theories?

In a new paper in the Proceedings of the National Academy of Sciences, a team from the University of Pennsylvania, Budapest University of Technology and Economics, and University of Debrecen uses math, geology, and physics to demonstrate that the average shape of rocks on Earth is a cube.

“Plato is widely recognized as the first person to develop the concept of an atom, the idea that matter is composed of some indivisible component at the smallest scale,” says Douglas Jerolmack, a geophysicist in Penn’s School of Arts & Sciences’ Department of Earth and Environmental Science. 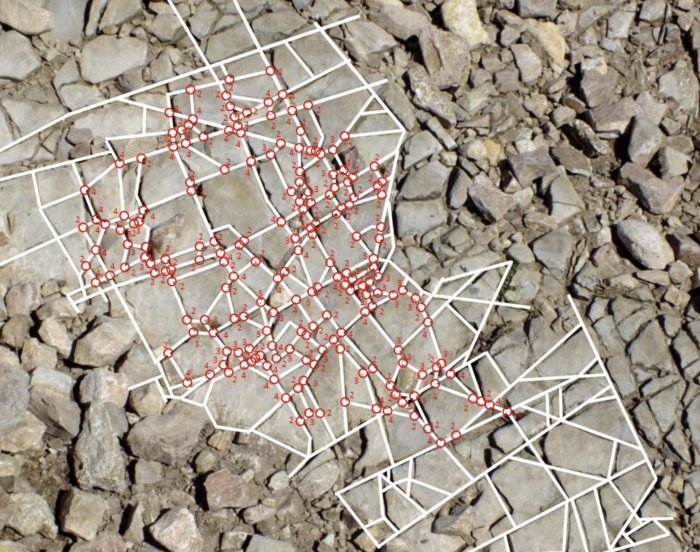 The research team measured and analyzed fragmentation patterns of rocks they collected as well as from previously assembled datasets. (Image: Courtesy of the authors)

“But that understanding was only conceptual; nothing about our modern understanding of atoms derives from what Plato told us. The interesting thing here is that what we find with rock or earth, is that there is more than a conceptual lineage back to Plato. It turns out that Plato’s conception about the element earth being made up of cubes is, literally, the statistical average model for real earth. And that is just mind-blowing.”

Mathematician Gábor Domokos of the Budapest University of Technology and Economics explains the study took three years, but at the end it comes back to one core idea.

“If you take a three-dimensional polyhedral shape, slice it randomly into two fragments and then slice these fragments again and again, you get a vast number of different polyhedral shapes. But in an average sense, the resulting shape of the fragments is a cube,” Domokos says.

How does nature let this happen?

Domoko says he and his team believed this must be a big mistake, but then they worked backward to understand the physics that results in these shapes.

Fundamentally, the question they answered is what shapes are created when rocks break into pieces. Remarkably, they found that the core mathematical conjecture unites geological processes not only on Earth but around the solar system as well.

“Fragmentation is this ubiquitous process that is grinding down planetary materials,” Jerolmack says. “The solar system is littered with ice and rocks that are ceaselessly smashing apart. This work gives us a signature of that process that we’ve never seen before.”

Part of this understanding is that the components that break out of a formerly solid object must fit together without any gaps, like a dropped dish on the verge of breaking. As it turns out, the only one of the so-called platonic forms—polyhedra with sides of equal length—that fit together without gaps are cubes.

“One thing we’ve speculated in our group is that, quite possibly Plato looked at a rock outcrop and after processing or analyzing the image subconsciously in his mind, he conjectured that the average shape is something like a cube,” Jerolmack says.

To test whether their mathematical models held true in nature, the team measured a wide variety of rocks, hundreds that they collected and thousands more from previously collected datasets. No matter whether the rocks had naturally weathered from a large outcropping or been dynamited out by humans, the team found a good fit to the cubic average.

However, special rock formations exist that appear to break the cubic “rule.” The Giant’s Causeway in Northern Ireland, with its soaring vertical columns, is one example, formed by the unusual process of cooling basalt. These formations, though rare, are still encompassed by the team’s mathematical conception of fragmentation; they are just explained by out-of-the-ordinary processes at work.

“The world is a messy place,” says Jerolmack. “Nine times out of 10, if a rock gets pulled apart or squeezed or sheared—and usually these forces are happening together—you end up with fragments which are, on average, cubic shapes. It’s only if you have a very special stress condition that you get something else. The earth just doesn’t do this often.”

The researchers also explored fragmentation in two dimensions, or on thin surfaces that function as two-dimensional shapes, with a depth that is significantly smaller than the width and length. There, the fracture patterns are different, though the central concept of splitting polygons and arriving at predictable average shapes still holds.

“It turns out in two dimensions you’re about equally likely to get either a rectangle or a hexagon in nature,” Jerolmack says. “They’re not true hexagons, but they’re the statistical equivalent in a geometric sense. You can think of it like paint cracking; a force is acting to pull the paint apart equally from different sides, creating a hexagonal shape when it cracks.”

In nature, examples of these two-dimensional fracture patterns can be found in ice sheets, drying mud, or even the earth’s crust, the depth of which is far outstripped by its lateral extent, allowing it to function as a de facto two-dimensional material. It was previously known that the earth’s crust fractured in this way, but the group’s observations support the idea that the fragmentation pattern results from plate tectonics. 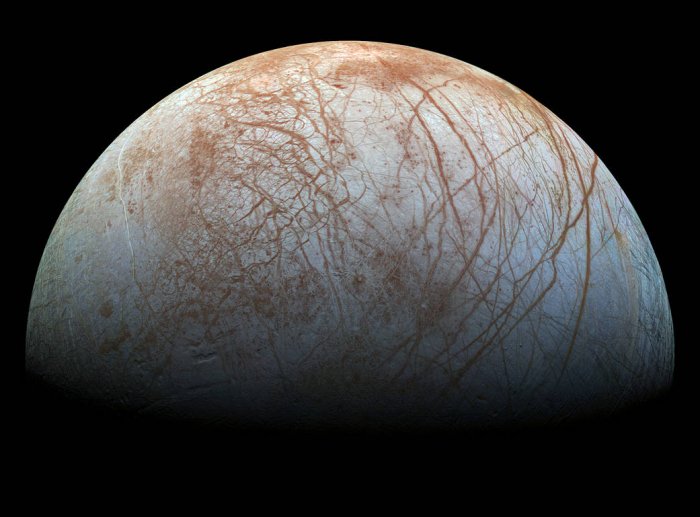 The fracture patterns the scientists identified can be found not only on Earth, but around the solar system, including on the mosaic-like surface of Jupiter’s moon, Europa. (Image: NASA/JPL-Caltech/SETI Institute)

Identifying these patterns in rock may help in predicting phenomenon such as rock fall hazards or the likelihood and location of fluid flows, such as oil or water, in rocks.

For the researchers, finding what appears to be a fundamental rule of nature emerging from millennia-old insights has been an intense but satisfying experience.

“There are a lot of sand grains, pebbles, and asteroids out there, and all of them evolve by chipping in a universal manner,” says Domokos, who is also co-inventor of the Gömböc, the first known convex shape with the minimal number—just two—of static balance points. Chipping by collisions gradually eliminates balance points, but shapes stop short of becoming a Gömböc; the latter appears as an unattainable end point of this natural process.

The current result shows that the starting point may be a similarly iconic geometric shape: the cube with its 26 balance points. “The fact that pure geometry provides these brackets for a ubiquitous natural process, gives me happiness,” he says.

“When you pick up a rock in nature, it’s not a perfect cube, but each one is a kind of statistical shadow of a cube,” adds Jerolmack. “It calls to mind Plato’s allegory of the cave. He posited an idealized form that was essential for understanding the universe, but all we see are distorted shadows of that perfect form.”