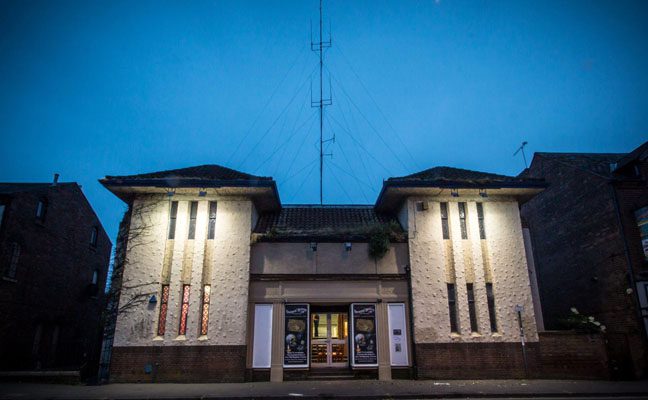 The Devil’s Guitar and a doll that moves are just some of the strange items inside!

(By Matt Jarram for Nottinghamshire Live)

A former cinema in Mapperley is set to give visitors a fright after being transformed into a new haunted museum.

Paranormal investigator Steve Wesson, 45, has been collecting rare and unusual artifacts linked to the dead for many years.

He now wants to share his morbid exhibition and has decided to use the haunted Mapperley cinema as the backdrop.

The Majestic cinema in Woodborough Road opened in 1927 and closed its doors in 1957.

Mr Wesson and his crew at UK Ghost Hunts believe the building is extremely haunted. Only last month a mysterious metal door, nailed shut, was discovered hidden behind a false wall.

Now, its creepiness continues as the building will house the first museum in Nottinghamshire to exhibit rare and strange artefacts linked to the dead.

They include a morgue fridge from Denbigh Insane Asylum in Wales, which dates back to 1844, plus Henry – a 400 year old skull belonging to someone who fell victim to the plague.

There is also the Devil’s Guitar – all the way from Iraq – an ancient instrument used to summon Satan, which has made some people feel ill once they have touched it.

There is also Thomas – a doll made from a dead husband’s bed bandages in the 1970s. Thomas has been seen to move by himself – and even lift up his arm.

One of the freakiest items is a Dybbuk box – which is used to seal a possessed spirit – and is kept closed with candle wax and string. There is an engraving on this box which translates as “holding the demon within”.

Stephanie Tucker, 25, lead investigator who also runs paranormal nights at the venue, told the Post: “The museum is free – the only thing we charge for is the tea room.

“A lot of the items are from families that have donated them because the items have become too much for them to keep.

“The collection has just grown and Steve always wanted his own haunted museum.

“It is something new in Nottingham and that’s why we wanted to open it.”

Mr Wesson added: “I have been collecting stuff for years and it is just awesome to share it with other people.

“We had to have the right place. It had to have lots of history and it had to be haunted.”

The Haunted Museum is open Monday to Friday from 10am to 2.30pm.