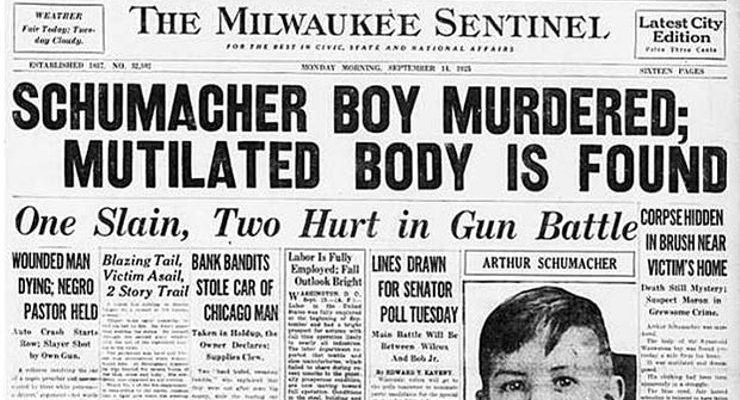 On the morning of July 24, 1925, a young boy named Arthur “Buddy” Schumacher, Jr. left home with his friends, heading for their favorite local swimming hole. When he walked out the front door of his family’s Wauwatosa, Wisconsin, home on that hot summer day, his mother had no idea that she would never see him alive again.

The town of Wauwatosa, just west of Milwaukee, was a quiet, peaceful town in the 1920s. Bad things just didn’t happen there – at least until the day Buddy disappeared.

Buddy was described as a good-hearted, with a happy disposition and lots of friends. He was easy to get along with and a happy-go-lucky boy. On the day he was last seen, he was with a group of friends who all wanted to go swimming to beat the summer heat. They had a favorite spot and hopped onto a freight train to get there. Three of his pals later reported seeing him jump off the train with the others that day. But none of them ever saw him again – he simply never came home.

Buddy’s parents, Art and Florence, along with his older sister, Jeanette, couldn’t imagine where the boy had gone. He never would have purposely worried his parents. He had always been a responsible child and had never been one for playing pranks. It seemed almost impossible to believe, but something terrible must have happened. A search party was formed and for weeks, police officers and volunteers looked everywhere for Buddy. Then, bizarrely, after he had been missing for seven weeks, a body was found less than a mile from the Schumacher’s home. The corpse was badly decomposed, but it was identified as the missing boy. There were signs that he had been mutilated and sexually abused, and a handkerchief was found stuffed deep into his throat. Doctors surmised that the cause of death was suffocation.

Local and national newspapers descended on the scene, printing all the lurid details of the case. Photographers followed detectives and family members, even at the funeral, which was held in the Schumacher home. All the media attention put pressure on the police and they worked tirelessly to follow every clue. They followed every lead, but all of them led to dead ends. Suspects were brought into the station for questioning, including an area drifter who became a lead suspect but was released due to a lack of hard evidence. Two different mentally ill men confessed to the crime, but their stories made no sense and they were not considered as serious suspects. Unfortunately, in the chaos of the investigation, the handkerchief that was found in Buddy’s throat went missing from the district attorney’s office. It was never found. Several witnesses retracted their original statements and the investigation slowly came to a halt.

The shocked people of Wauwatosa had assumed that the killer of Buddy Schumacher would be quickly apprehended – but they were wrong. All these years later, the murder remains unsolved.

Buddy’s family and relatives spoke very little about the tragedy. Two years after his death, they moved away. A new family, the Hoffmans, moved into their home and their son, Paul Hoffman, developed a fascination with Buddy’s case. He later published a book (recommended!) called MURDER IN WAUWATOSA: THE MYSTERIOUS DEATH OF BUDDY SCHUMACHER. He grew up in Buddy’s old house, knew his neighbors, and heard the stories that were still circulating around town many years later. He went on to interview family members, including Buddy’s sister’s children, Keith and Brian Egloff, searched old newspapers and archives, and compiled years of research.

He eventually came to his own chilling conclusions. He said in an interview: “I think I know who committed the murder. I don’t think that after all this time, there’s a way to prove it, though. So, it will just have to stay an educated guess based on the facts presented.”

Death had also claimed the killer, Hoffman believes, so perhaps that small bit of cold comfort is enough to give Buddy Schumacher and his family a small bit of peace.