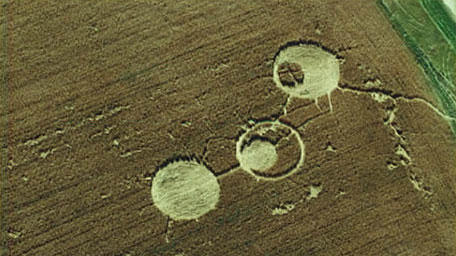 Retired truck driver Arthur Rantala was in his workshop drinking his first cup of coffee on the morning of July 4, 2003 when it happened. He had been watching the storm roll in across Dodge County, dark clouds moving across the wide swath of sky over the wheat field across the street. The hill Arthur’s property sat on a few miles outside the town of Mayville, Wisconsin gave him a spectacular view of the countryside.

Arthur poured a cup of coffee and watched out the window as a strong wind picked up and rain started to fall. It was about 7:40am when Arthur noticed the wind was peeling the bark from the hickory nut tree about ten feet from the workshop.

That’s when the trees across the street in his neighbor’s field caught Arthur’s eye. He noticed the trees begin to blow around violently. Then his gaze shifted to movement in the field. The tall stalks of wheat flattened into three circular formations seemingly on their own as Arthur watched.

“The one on the left appeared first and it looked like a black hole,” Arthur told a local newspaper, “then the one on the right and then the one in the middle. All in a matter of 10 to 12 seconds.”

Arthur said he didn’t want any “notoriety” for what he witnessed. It was actually his sons who spread the word.

Wisconsin has no less than three towns claiming to be the “UFO Capital” due to the amount of sightings that occur in those areas. Extraterrestrials once served pancakes to an Eagle River man. A Dundee resident, where some suspect a large glacial formation known as Dundee Mountain may contain a secret alien base, was in contact with an extraterrestrial who visited from many light years away to watch the Green Bay Packers. Despite all of this, crop circles are not a very common occurrence in the state.

It is even more rare to have an eyewitness.

“Mr. Rantala’s important eyewitness observation to the crop circles forming may be the first ever recorded in the USA, and is certainly one of only a couple of dozen reported world wide in the last 50 years,” a field report from an investigation of the crop circles states. “Mr. Rantala reported that there was no apparent means for the wheat to have been swirled and flattened – nothing unusual in the sky, no lights, no unusual sounds, and no unusual odors. Whatever the energetic force was that caused the circles to form, it was beyond the range of visible sight.”

Many locals came to see the circles for themselves and stand inside them. Gary Kahlhamer shared photos online, which caught the attention of out-of-state investigators Dr. Charles Lietzau, Jeff Wilson and Roger Sugden. Lietzau and Sugden were both members of MUFON (Mutual UFO Network) and Wilson had previously investigated an estimated 100 crop circles.

The four men conducted a scientific investigation of the circles from July 23-24. They discovered several anomalies that caused them to conclude Rantala’s account was accurate and it was not a hoax.

One of these anomalies was the presence of blown node collars, also known as expulsion cavities, in the joints of the flattened wheat.

“This happens when the base of a leaf at the node is flash heated and causes the node to explode like popcorn,” Lietzau explained. “It is distinct and can be easily distinguished from damage caused by trampling crop plants.”

In the team’s report, Wilson writes, “There is no known technology that is able to duplicate this blown node collar effect on thousands of plants in these downed areas of crop fields. However, this effect has been reproduced by putting stems into a microwave oven, and cooking them for a short time. The appearance, then, of these blown node collars is conclusive evidence – in itself – that these circles were not flattened by human-mechanical means.”

These and other deformities were discovered in the wheat within the circles, as well as in other “randomly-downed” patches throughout the field as far as 500 feet from the circles. They also discovered the soil in those areas to be highly magnetized.

The report also details the unique geology of the area, such as the iron-rich area of Iron Ridge, the rocky formation known as the Ledge, where the Niagara Escarpment rises up from under the great lakes, the high concentration of Native American effigy mounds (more than 500 in a 15-mile radius), petroglyphs aligned with the rising of the solstice sun, and vast limestone deposits.

“Crop circles around the world have been noted to occur along aquifers, or water-bearing rock formations, notably limestone and greensand,” the report says.

The group’s findings also note the close proximity of the power lines running along the road opposite the field – another common factor among crop circle formations.

During a separate investigation, researcher Mary Sutherland and her husband Brad, of the Burlington UFO and Paranormal Research Center, noticed another unusual detail. They detected a crackling or warbling sound emanating from around and inside the formation, a phenomenon they say has been a common characteristic of crop circles since the early 1980s.

They have provided what seems to be a recreation of this sound right here.

The US government has finally admitted to the existence of UFOs, or UAP – Unidentified Aerial Phenomena – after the recently leaked (now officially released) videos of Air Force pilots tracking strangely shaped crafts.

A military presence in rural Mayville, however, was more X-Files than CNN primetime news in 2003.

Locals had reported military helicopters surveying the field in the weeks following the appearance of the circles, which Kahlhamer, Lietzau, Wilson and Sugden were able to confirm.

On the second day of their investigation, the team was working in the field when a military helicopter arrived (to their “excited amazement,” they noted) and circled low over the formation for some time before eventually flying off and out of sight.

About 45 minutes later, they noticed a man in camouflage watching them with binoculars from the hill up the road. The man then drove down the hill, got out, and approached them in the field. He was a soldier wearing a US Air Force uniform and identified himself as a member of a special crop circle investigative unit from Scott Air Force Base in Illinois. He said they were temporarily based out of Milwaukee for the last couple weeks while investigating the Mayville formation.

The soldier walked around the circles while the team, who had already planned to release their research publicly, anyway, shared their findings with him. They noted that he declined to answer most of their questions, took their contact information, and left.

The US Air Force investigates the Mayville crop circles on July 24, 2003. Photo from the field report by Jeffrey Wilson, Charles Lietzau, Gary Kahlhamer and Roger Sugden.

The wheat was eventually harvested that year, and with it all evidence of the crop circles. Arthur, whose phone didn’t stop ringing for some time, was happy to have life get back to normal. When pressed about what he saw, Arthur said he believed the circles were formed by the storm.

“People are going to believe what they want to believe,” Arthur said. “I saw what I saw and I didn’t see any spaceship or aliens.”

After the Sutherland’s investigation, however, Mary and Brad confidently put the speculation to rest. They determined that “the reason Mr. Rantala couldn’t see what formed the circle is because of them being able to manipulate light. By bending the light, they could physically be there but invisible to the viewer.”

Source: Cult of the Weird
https://www.cultofweird.com/ufo-sightings/mayville-crop-circles-wisconsin/