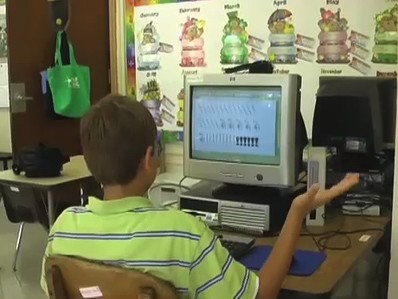 An American schoolboy appears to have developed a special talent – for crashing computers. Joseph Falciatano, a 12-year-old from New York state, has taken on the moniker ‘Magneto Man’ after continuously causing his school’s computers to stop working.

Experts are baffled as to why the youngster has the bizarre power but believe it is down to the unique amount of static electricity he produces. In order to keep their IT suite running, the school put a grounding pad under Joe and gave him an anti-static wrist-strap.

“Another student could use a computer, and it would be fine. But if Joe was on it, weird things started to happen,” Marie Yerdon, computer lab teacher at Lura Sharp Elementary School in Pulaski, told local newspaper The Post-Standard.

The school also emailed his parents to inform them of their son’s capacity to stop electrical devices – a tendency they also see at home.

Joe also had problems with his Xbox console, and was ‘forced’ to upgrade to an Xbox 360 as a result of the issues the wired controller on the older model was having.

The Xbox would freeze whenever Joe tried to use it and even with the wireless controller used on the Xbox 360 he has to sit across the room from the games console.

Joe’s special powers also almost resulted in the cancellation of an awards ceremony for his fellow students and their parents after a slide show of the fifth-grade schoolchildren began to crash because he was too near.

“They were going through the slide show, and my son was sitting quietly,” Joe’s dad, also called Joe, said.

“And all of a sudden, the music started to slow down and get distorted, and the pictures were messing up, stuff like that. As parents, we didn’t think anything of it, until two teachers sprinted over to get to Joe. We’re thinking, ‘What did he do? Did he do something wrong?’

“The teachers moved him away to the side of the room, and then the slide show started going again, and the computer went back up to speed. And then we realized that it wasn’t that Joe was misbehaving. They were moving him away from the hard drive so the computer wouldn’t crash.”

Static experts have been called in to monitor the youngster but have been so far unable to pinpoint the cause, admitting that his super-static ability remains a “mystery”.