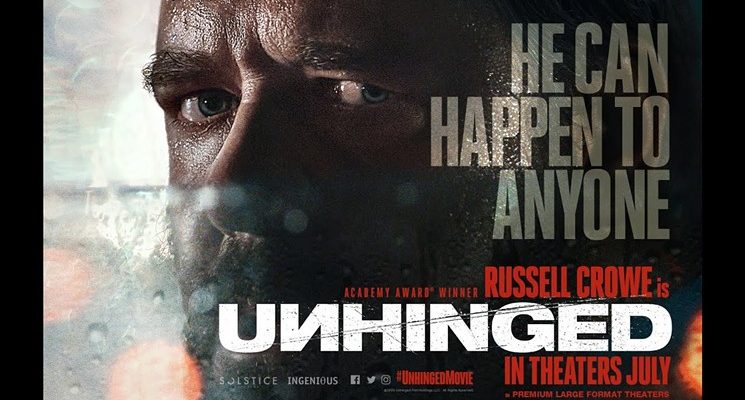 — by Darren Marlar
(Note: If you want to enjoy this film do not watch the trailer as it gives away everything.)
My bride and I just finished watching Unhinged (2020) starring Russell Crowe (Gladiator, A Beautiful Mind). Not to be confused with Unhinged (2017), Unhinged (2014), Unhinged (2006), Unhinged (1982), the three episode web series “Unhinged” (2017), nor the still in pre-production Unhinged which may remain there because it’s IMDB page hasn’t been updated since November of 2019… none of which star Russell Crowe.
My bride thinks he’s a good looking guy and a great actor.  I think it’s good to be around my bride when she’s spending 90 minutes gawking at a man she finds attractive.  Sue me.  Even after gaining weight and appearing to be 300lbs or more onscreen, Mr.s Marlar said Crowe is still a good looking guy. Yes gentlemen, I married well.
Unhinged is a tension-filled, and literal “drive to madness” when soon-to-be-single mother, Rachel (Caren Pistorious) succumbs to the aptly named “road rage” and leans on the horn angrily when another driver doesn’t move upon the light turning green. Unfortunately, she doesn’t know what kind of day that man has had prior to this, and inadvertently, her road rage triggers his road rage. You had better be ready to squirm, wince, flinch, and gasp while watching the inevitable car chases, close calls, and auto accidents.
In fact, they could’ve made that last sentence the entire premise of the film and still this would be a fun rental.
Watching Crowe in the role of a villain is enjoyable. I’ve seen many critics make the crack that Crowe phoned in his role this time (mobile phones are used a lot in the movie), but I think the apathetic take on the character of “Man” (we never do find out his name, Crowe’s character according to IMDB actually is called “Man“), was intentional to show the disassociated monster he truly was. There was apathy and anger in him – he wasn’t built of anything else.  I think this would especially work for someone who may have been in or who knows someone from an abusive relationship – this is a man, if you knew him, you’d walk on eggshells around for fear of setting him off at the slightest thing, knowing the explosion that would follow.  Crowe plays it like stalking his prey comes as naturally and as frequently as ordering coffee at drive-thru, then shooting the drive-thru worker for not offering him enough sugar. This does not happen in the film, but in my mind it very well could have if this guy was to be followed with a camera all the days of his life.
Caren Pistorious (Slow West, A Light Between Oceans) as Rachel is very good. I actually liked her more in the moments when she had her son with her while dealing with this madman as opposed to being the single woman running from a psycho. And after typing that out and saying it aloud, it is obvious as to why I preferred those moments. This film is not your typical “girl gets chased by killer” thriller you might expect it to be when you first begin watching. 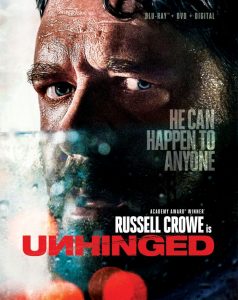 But this is a thriller; heck… I’ll say it… it’s a horror film. The movie poster doesn’t tell you that, but the trailer does. However, I will say it again, if you want to enjoy the film, do not watch the trailer.
I had never seen the trailer so I only had a basic idea going in about the premise. I am so glad I hadn’t.  It made the film a nail biter for me.  In preparing for this review I viewed the trailer and every great moment in the film I remembered was there, spoiled.
Another main character which might be overlooked is the city this takes place in: New Orleans. The story is set there and the film was shot there, but the name of the city within the story barely gets a mention, if at all – as I don’t remember anywhere in the film being told what city we were supposed to be in.  But this is a very wise decision from director Derrick Borte (American Dreamer, London Town) in my opinion, as it allows you to assume it could be anywhere unless you are familiar with New Orleans already. To me, it felt like Chicagoland, with the gritty dowtown and ugly freeways, the traffic-crammed side streets flowing out into the urban sprawl, to nicer upscale suburbs where the winding streets and million dollar homes can be found. I could say the same for my hometown of Kansas City… and likewise for Los Angeles, New York, etc.  It’s just reaffirming the film’s tagline: “He can happen to anyone.”
While there are some moments you might find unbelievable, particularly one specific aspect that I’m not sure how they would explain (hey, it is a movie after all), the scariest part of it all is how believable screenwriter Carl Elsworth (Red Dawn, Last House on the Left) and director Derrick Borte have made this feel.  This film might act as a public service announcement for driving defensively, not offensively, and being polite to other drivers even if an incident occurs and it is their fault.  Lay off the horn. Stop it with the finger signals.  Drop the foul language and screaming to a frustrated mumble if you have to.  Don’t give that other driver any excuse, as anything can trigger a person like this.
He (or She) can happen to anyone.
4 out of 5 screams for this one! 😱😱😱😱👤