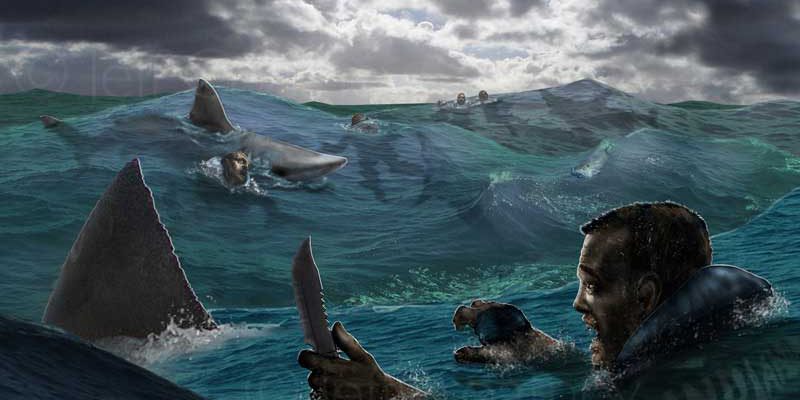 On July 30, 1945, the Portland-class cruiser USS Indianapolis went down in the Pacific Ocean and her sinking became the greatest single loss of life in the history of the U.S. Navy.

The USS Indianapolis served as flagship for Admiral Raymond Spruance while he commanded the Fifth Fleet in their battles across the Central Pacific during World War II. On 30 July 1945, shortly after delivering critical parts for the first atomic bomb to be used in combat to the United States air base at Tinian, the ship was torpedoed by the Imperial Japanese Navy. She sank in just 12 minutes. Of the 1,196 crewmen on board, approximately 300 of them went down with the ship.

The remaining 900 men faced exposure, dehydration, and shark attacks as they waited for assistance while floating with few lifeboats and almost no food or water. The Navy learned of the sinking when survivors were spotted four days later by the crew of a PV-1 Ventura on routine patrol. Only 316 sailors survived…

The most famous fictional reference to the events surrounding the loss of the Indianapolis occurs in the 1975 thriller JAWS in a monologue by brilliant actor Robert Shaw, whose character Samuel Quint is depicted as a survivor of the Indianapolis sinking. The monologue particularly focuses on the numerous deaths caused by shark attacks after the sinking. John Milius was specifically brought into the production to write lines for this scene and he based them on survivor stories. The monologue remains one of the most chilling ever recorded on film.